Union Station and all around was flooded with red this past Wednesday in celebration of Kansas City’s and the welcoming home of the Lombardi trophy. 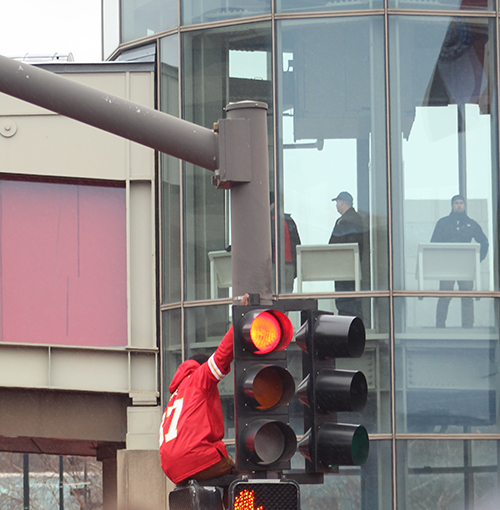 Some had even stayed overnight in cars to be there bright and early, some started showing up around 4 a.m. even though the parade didn’t start until 11:30. Maybe crazy? Maybe wise… and worthwhile.

From Travis Kelce calling out Dee Ford to the early morning car chase, this celebration will forever be one to remember. Yep, you saw that right… if you haven’t heard by now, the morning started out with a possibly dangerous car chase on the parade route with KCPD. Some nut charged the parade route in a sedan, but fortunately the KCPD did a fantastic job of stopping him without anyone being hurt.

If you happened to be at the parade and rally you may have also encountered tree climbers and an occasional light post climber, shades of Aggieville on victory night! Not to be outdone, one dude decided he would experience it all on horseback. This man was also arrested because apparently it’s frowned upon to play cowboy in a crowd of 800k. We give him 2 finger guns up for creativity.

The Chiefs themselves also had quite the time during the event. Patrick Mahomes catching beers from fans and crushing them, Travis Kelce water falling brewskis from one of the busses. The rally concluded with recognition of the Chiefs office staff and Coach Reid, followed by celebratory speeches from the team. Kelce’s stood out with a Beastie Boys chant, talking about past wins and how he “aint tryna hear it”, boasting about Coach Reid, Mahomes, Sammy Watkins, and Damien Williams. However, the best part was classic a Kelce-ism, “how about my dawg five five and he aint offsides”, referring to Dee Ford during the 2019 AFC Championship game where he single handedly blew the game for simply being offsides. The irony of the whole situation is that rather than experiencing the game with the Chiefs, Dee Ford spent it with the San Francisco 49ers.

They day was capped by a KCPD tweet mentioning that they had only made five arrests and that no one was seriously injured or killed. Good one, Chiefs Kingdom. 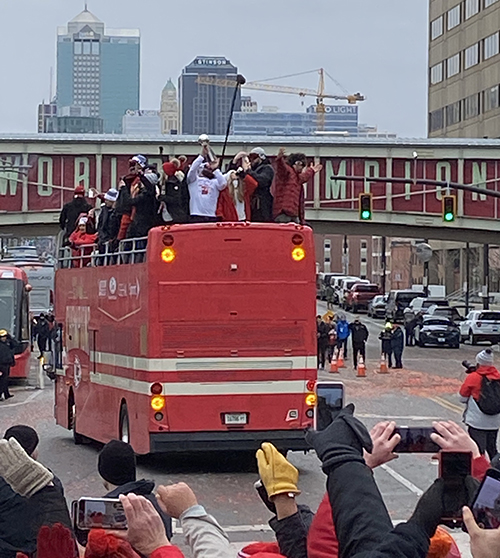