End of an era: RCPD Director Dennis Butler calls it a career

After 42 years of service to the public, Riley County Police Department Director Dennis Butler is officially retiring. Monday will be his last day on duty.

Butler began his policing career in 1979 when he was hired as a cadet. After about a year, he went to the academy and was hired as a police officer in 1980.

“When I got hired there was about 105,000 people living in Alexandria, a much smaller area than Riley County, it was only 15 square miles and we had 105,000 people. But, that first year that I was a police officer, 13,000 part one crimes were reported in the city of Alexandria. Just most recently, it’s been less than 3,000.”

Butler adds that crime across the country is measured using part one category crimes and it involves a specific number of violent and property crimes. Butler says those early days were during a time of violence and crime was rampant, saying that the work he did involved running from call to call. He says he often thinks about just how fortunate he is.

“When I think about some of the calls that I went on, some of the foot pursuits I engaged in, running through alleys, turning corners blindly at night, I could have been one of those officers that ended up, you know, being seriously injured or losing their life because that’s really how dangerous it was back then.”

Butler says through his experiences he has also learned a tremendous amount about people. Despite earning criticism from former coworkers, he says he has always taken pride in listening to one person at a time and listening to their concerns.

Butler says RCPD really is on a higher tier than anything he has ever experienced before or been a part of.

“I find it tremendously satisfying to end my career at a place, even if it was only for three years, that I felt like I fit in so well.” 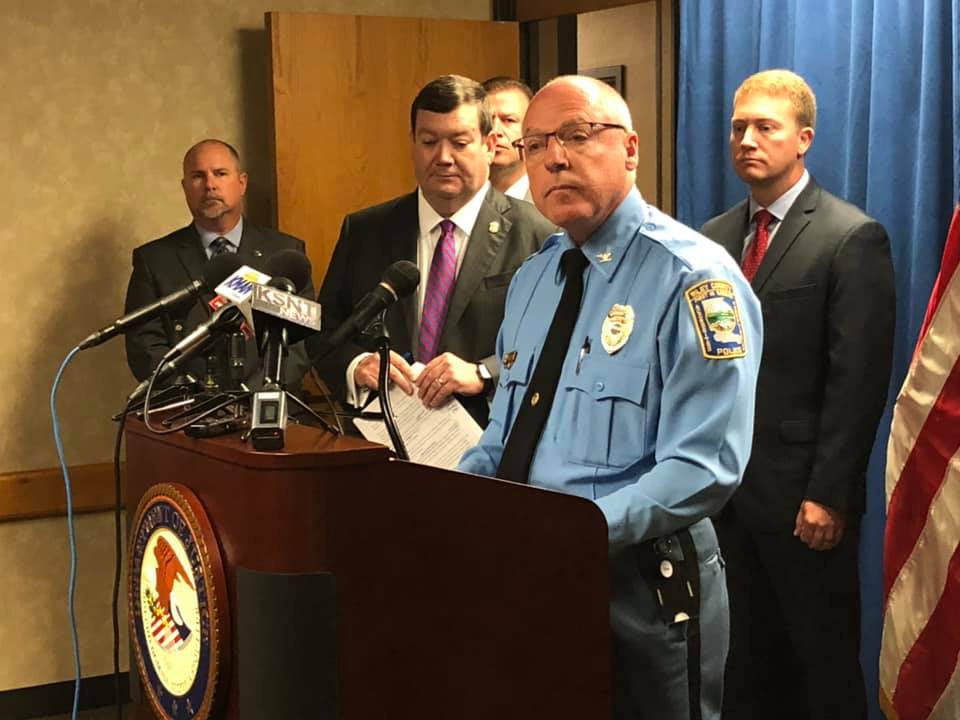 Many people around the community have recognized just how well he has fit in and what he has meant to the community. Former Manhattan city commissioner Aaron Estabrook says the work Butler has done will have an impact on the community for generations to come.

“The attention that he has brought and the focus he’s brought on his team to mental health issues and the work RCPD has been doing with the crisis intervention team and responders, it’s really amazing and it’s a big difference than maybe even five or ten years ago.”

Butler says there were already a lot of good things going on in Riley County when he arrived, but says learning how to respond and training officers on how to deescalate a mental health crisis has been an evolution in policing over the last several years.

“It had to happen, because, as you know, overall the country’s mental health system has degraded quite a bit, and I think more and more people are realizing what a mistake that was to let that happen and they’re working very hard to stop the bleeding and turn it around and start providing locally and giving communities the kind of crisis treatment that people really need.”

This is just one of the ways that Butler has built relationships with people in the community. His focus has always been on community policing here in Riley County, whether that means just listening to concerns of citizens or even hosting community events.

Butler says he has seen several organizations consider themselves to be “community policing” when they are just assigning certain people towards those community outreach efforts. He says his idea of community policing is different.

“It’s an overall philosophy that your organization embraces, and so everybody, whether they are sworn, non-sworn, should be engaged in community policing.”

Butler says it’s not just passing the buck and saying it’s not my job or responsibility, but instead making yourself available for the community to ask questions or share complaints.

“I think the fact that, especially if some people feel like they are being under served or they’re not being heard, the ability to ask me and then me give them an answer, again, even if it’s not the answer they want. Get an answer, the reasons and the rationale behind that answer, I think goes a long way in trying to strengthen support and understanding between policing and the community.”

Butler says policing is often misunderstood and people often learn what they think policing should be like from things other than real policing. He says people in this community have been receptive to him coming out and visiting with them and educating them. He adds that because of that he believes this community feels safer.

“When people see police officers here, I don’t think they automatically tense up and feel like, you know, that’s somebody I should avoid or fear. I think they feel, overall, comfortable.”

Butler adds that the entire police department has contributed to that success.

“This department really is stocked with so many good employees who are passionate about the work they do, dedicated, they have great training, and an outlook on what service looks like. Without them and their cooperation and buy-in to some of the ideas I’ve had and emphasizing some of the strengths they already had to make them better, things that we’ve done or accomplished, wouldn’t have been possible without them.”

Butler says he has his own experiences and accolades, but when it comes to big decisions, it wasn’t just him; those discussions were had with the entire command staff. 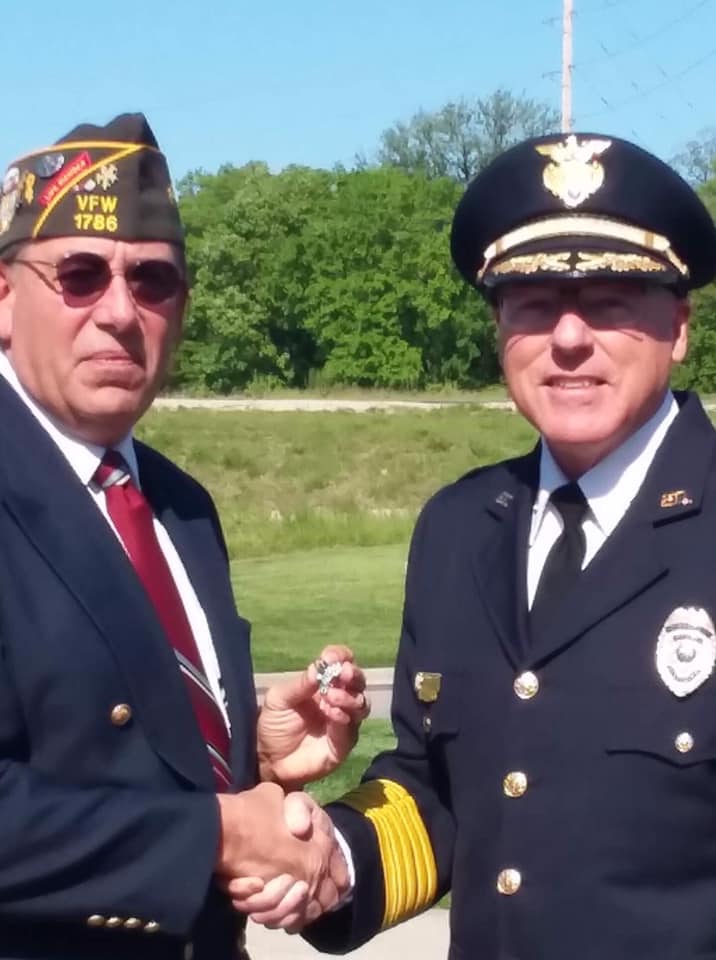 “I can say, almost without exception, with any idea I may have had, was always made better by having those discussions with them. And the reason is that I’ve only been here for about three years, so they have a historical perspective and context of things that I don’t have.”

Butler’s final day with the Riley County Police Department is Monday. Stepping in as the interim director will be an officer who knows all about that history, current assistant director, Kurt Moldrup. Moldrup has been with RCPD for over 36 years and Butler refers to him as the “Mayor of Manhattan”.

“He really does life his life as a faithful person. He isn’t seeking power, he’s not ambitious that way. He’s serving in this world because he was asked to and because he’s needed. So, I think he’s the exact right person to do this.”

Butler adds that the department is in good hands.

As the 10-7 quickly approaches, Butler tells KMAN it was an emotional decision and the first few months he was very conflicted. He adds that the last few months have been so busy, but now as the time is nearing, he is excited.

“When I turned the calendar over to January and I could see the last day, something about seeing that really got me excited and looking forward to it.”

Butler says he plans to travel with his wife during retirement. His first priority of travel is visiting family, friends, and his colleagues, his second priority is enjoying the beauty.

Butler says he will cherish the memories and the relationships he has received along his journey, and with his final words ahead of retirement on KMAN’s In Focus, “God bless you and the people of Riley County.”

Director Butler was honored during a private ceremony Friday at the Midwest Dream Car Collection, where a number of colleagues, dignitaries, family and friends gathered to congratulate him on his career.

Many in the community have pointed to Butler’s leadership during the aftermath of the George Floyd murder by police in Minnesota as one of his shining moments during his tenure as RCPD director. The director marched alongside Black Lives Matter protesters in Aggieville in June 2020. Some of those who marched with him were also on hand at Friday’s private retirement reception.

The post End of an era: RCPD Director Dennis Butler calls it a career appeared first on News Radio KMAN.