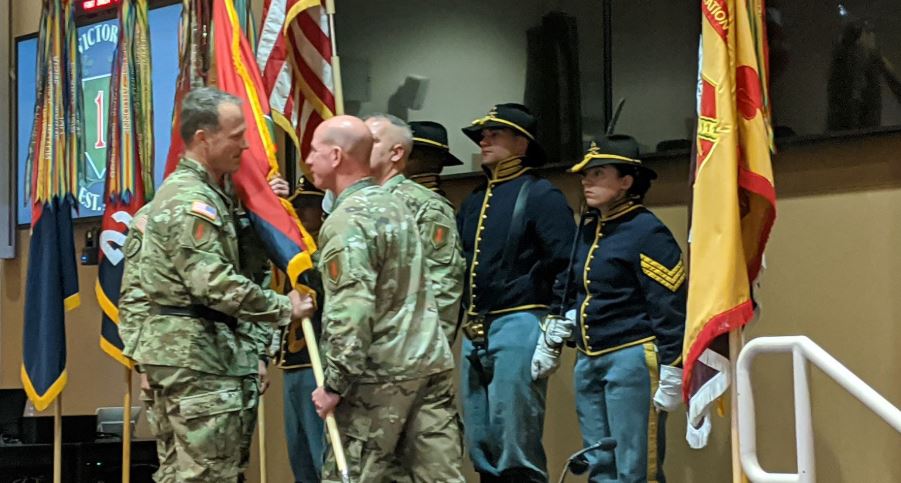 Command Sgt. Maj. Craig Bishop passes the division colors to Maj. Gen. John Kolasheski who would then pass the colors to Command Sgt. Maj. Raymond Harris, part of the traditional passing of the colors between the outgoing and incoming senior NCOs, a symbol of the transfer of command responsibility and authority from Bishop to. Harris, January 24, 2020. (Nick McNamara/ KMAN)

Fort Riley on Friday said goodbye to one of the Army’s “finest senior noncommissioned officers,” in the opinion of the post’s commanding general.

The 1st Infantry Division and Fort Riley honored outgoing Command Sgt. Maj. Craig Bishop and welcomed in his successor, Raymond Harris, in a change of responsibility ceremony. Bishop, enlisted out of Sweetwater, Tennessee, has served in all NCO Leadership duty positions during his tenure in the Army beginning in 1992. He leaves Kansas for North Carolina, assigned to Fort Bragg as the command senior enlisted leader for the Joint Special Operations Command. 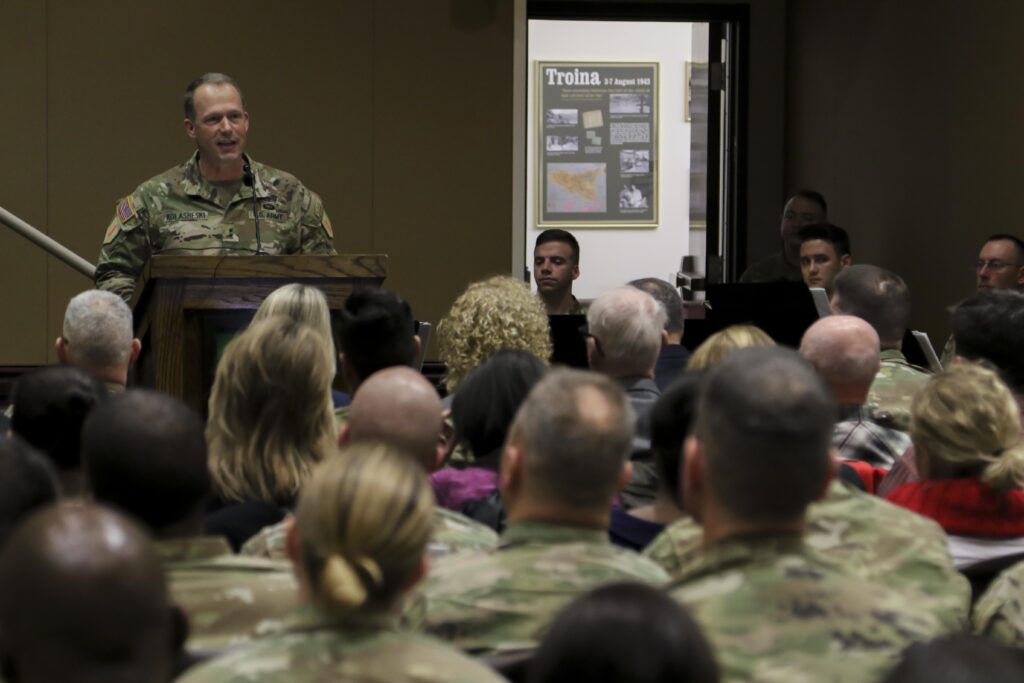 “He truly embodies and has set the example for what it means to be a soldier, a husband, a brother, a father, and, for me, a friend,” says Maj. Gen. John Kolasheski.

Bishop was presented the Legion of Merit Medal during the ceremony, the last round fired during the salute battery, a flag flown at the post and even a photo he had taken with Kolasheski and others. They add to Bishop’s host of decorations and awards that include the Bronze Star for Valor, four Bronze Stars, the Purple Heart and five Meritorious Service Medals.

Kolasheski says Bishop’s expertise was evident from day one, his impact undeniable, and that he demonstrated “what it means to be a trainer, mentor and, above all, a leader — a leader of character.

“I simply could not have asked for a better teammate, ranger buddy or friend,” said Kolasheski. “I’m better for having served alongside you.”

Bishop said when he enlisted, he never envisioned reaching his rank and thanked god for his mental and physical ability, Maj. Gen. Joseph Martin for hiring him, division staff and the garrison team, the local community as well as Kolasheski. 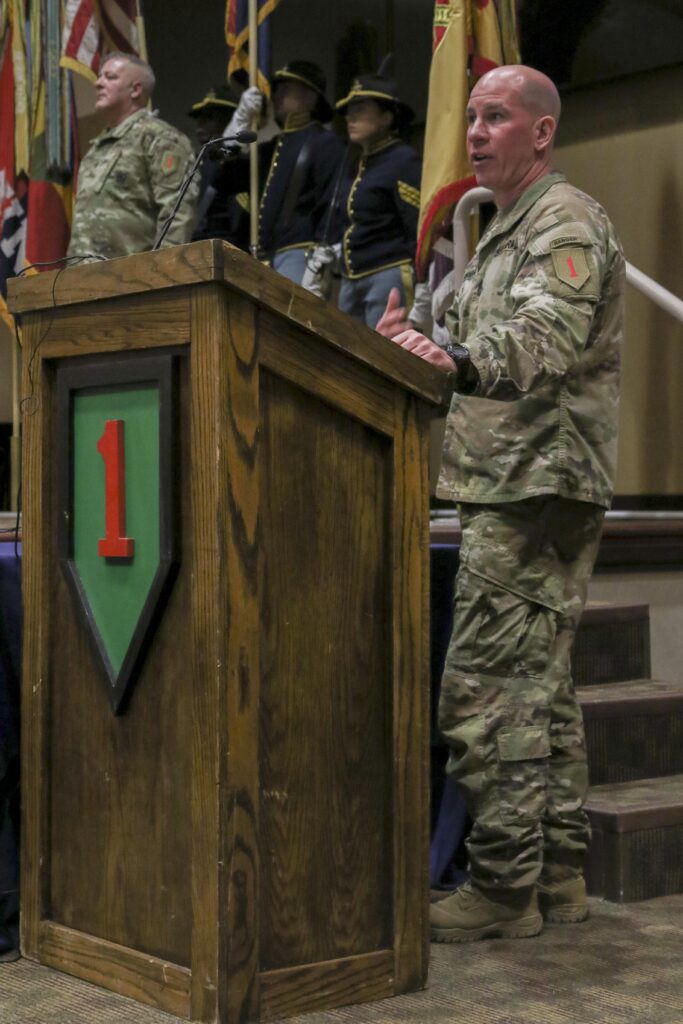 Command Sgt. Maj. Craig A. Bishop gives his final speech as the 1st Infantry Division’s senior enlisted advisor at Fort Riley, Kansas, on January 24, 2020. The change of responsibility ceremony marked the official end of Bishop’s duties within the division and the start of his replacement, Command Sgt. Maj. Raymond S. Harris. (U.S. Army photo by Sgt. Thomas A. Scaggs)

“Thank you for everything — your leadership, the friendship, the discussions,” says Bishop. “And a lot of times just letting me walk into your office and vent because I couldn’t talk to anybody else about what I was frustrated about.”

The commanding general also thanked the Bishop family, unable to attend due to weather, saying their support for Bishop and participation in events had an influence on the soldiers and installation in more ways than they know. Bishop also showed appreciation for the support of his wife, Holly, and three sons, Hunter, Zachary and Riley, throughout his career.

“You inspire me everyday, there’s no way I would be here without you,” Bishop said, looking to the camera livestreaming the ceremony. “I look forward to getting home and living under one roof again, but I know you guys are out there and it means the world everything you do for me and this division and the Army on a daily basis.”

The ceremony included the traditional passing of the colors between the outgoing and incoming senior NCOs, a symbol of the transfer of command responsibility and authority from Bishop to Harris. Command Sgt. Maj. Harris enlisted as an Infantryman in 1996, previously serving as Brigade Command Sergeant Major for the 3rd Security Forces Assistant Brigade at Fort Hood. He’s served with the Big Red One for seven of his 24 years in the Army — including 19 months in combat. He holds civilian degrees in business and homeland security in addition to a Master’s in leadership studies.

Kolasheski says Harris “brings a wealth of experience and leadership,” having deployed in support of the Kosovo Campaign, Operations Enduring Freedom Cuba and Afghanistan as well as Operation Iraqi Freedom.

“It has been a quick transition. As many of you know, Sgt. Maj. Harris was in Afghanistan just a few weeks ago, leading of the Army’s newest units on its first combat deployment,” said Kolasheski. “You have a tough act to follow, but I know you are up to the challenge.”

Bishop also wished his successor well, saying the two forged a friendship during the period of transition and telling Harris he’s only a call away.

“There’s no doubt in my mind that you’re going to take this place to the next level, and probably do a heck of a lot better job than I ever did.”

Harris’ wife, Leah, was presented with a bouquet of yellow roses while his daughter, Riley, received a single rose and his son, Jaydon, was given a division coin. Yellow is the color of joy and friendship and symbolizes the relationship of division soldiers and the Family Readiness Group. Kolasheski welcomed the Harris family and Harris thanked his wife and children for their support throughout his career. He also thanked Kolasheski for the opportunity and expressed his devotion to his new position. 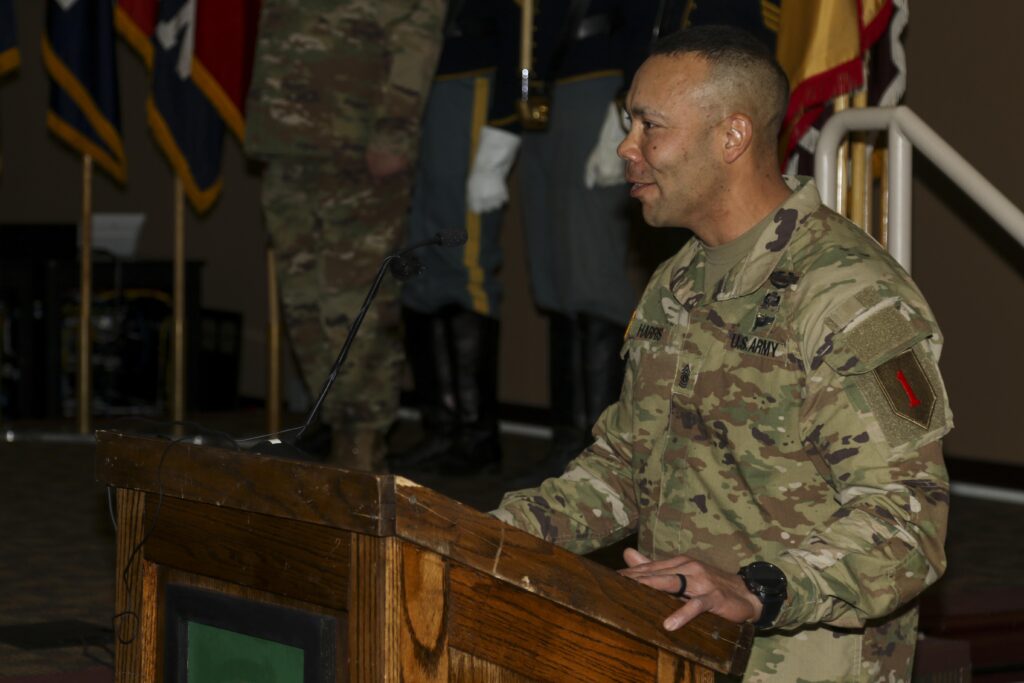 “I can promise you, the soldiers of the division, the families and our community partners, that I’m fiercely loyal, I’m committed and I’ll give you everything I have and then some.”

He closed by thanking his predecessor for his reception and wishing him well in his new assignment.

“You’ve left a lasting impression on the division and I know this division and community’s going to miss you,” Harris said. “You’ve always got a home here in the Big Red One.”

Harris was presented with the first round fired by the salute battery to symbolize his first day.