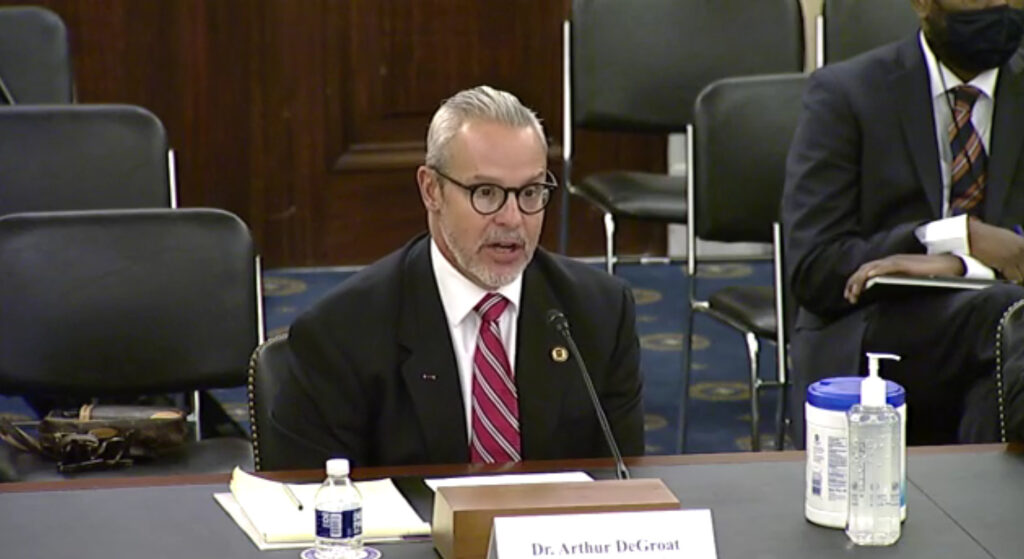 The founder of Kansas State University’s Office of Military and Veterans Affairs shared lessons from his research and practice on how to better aid soldiers transitioning out of the military with the U.S. Senate Committee on Veterans’ Affairs Wednesday.

Dr. Arthur DeGroat testified to the committee in Washington D.C. during a hearing titled ‘Success After Service: Improving Veterans’ Employment, Education and Home Loan Opportunities. DeGroat served 22 years as an armor and cavalry officer in the U.S. Army, and prior to founding the OMVA worked as head of K-State’s Military Science Department.

“I believe we are operating without a coherent national evidence-based strategy for veterans’ transition assistance,” DeGroat says. “Which, in my view, explains much of our lack of success despite effort and commitment.”

DeGroat told senators transitioning from military to civilian life and employment is incredibly stressful, particularly for veterans of the Post 9/11 era.

“There really is a lack of understanding about the nature of the transition experience today,” says DeGroat. “It’s not simply just going to war, coming home and going back to the farm or back to the factory; It’s really a bold, bold move.”

DeGroat cited a sociological tool called the Holmes & Rahe Social Readjustment Scale. The tool has its roots in the work of psychiatric research conducted by Thomas Holmes and Richard Rahe, which found correlations between stressful life events and illness rates.

The scale lists the 43 most stressful life events adults face, though DeGroat notes transitioning from the military is not included.

“I took all the cases of the veterans that I individually studied on their life experience of transition,” says DeGroat. “Almost every one had about eight or nine of those 43 issues happening at the same time.

“If you add up the stress level scores, it puts them over the top.”

DeGroat says Post 9/11 veterans are the first generation of soldiers that were digital natives, truly co-present both on the battlefront and home front due to greater online connectivity. The cognitive stress of that as well as the rise of iterative deployments rather than deploying and staying in the combat zone are all differences he noted are faced by this generation of service members.

That, as well as changes in employment opportunities, all add stress to the transition process according to DeGroat.

“About 80 percent of previous generation of veterans were absorbed in the Allied Military Career field,” he says. “We had a very robust industrial base, the military talent and experience and the culture translated directly into work in defense industry or consultants or contractors.

“Because of outsourcing, just-in-time logistics, and commercial off-the-shelf acquisition, we’ve lost that industry to hire our veterans — this is the first generation of veterans that have to actually compete with people already in the workforce and they have been absent in the workforce.”

DeGroat says the ongoing ‘veteran suicide phenomenon’ is associated with these changes and the employment of lacking strategies of transition assistance. He says there is a real link between failed transitions and suicide rates, as exemplified by research showing never-deployed soldiers are highly represented among military members who have attempted suicide.

Chair Sen. Jon Tester (D-MT) says the issue of mental health in the military is ‘particularly disturbing,’ but not limited to just that sector of U.S. society.

“I’ve always said if we can unlock what’s going on in the veteran’s mind with the transition and after they become civilians — and even while they’re in the military — we may be able to transfer that information we know to the private sector so everybody can win,” Tester says.

“I really hope that the VA and mental health groups out there really utilize you, Dr. DeGroat. I think that you have a lot to offer to this conversation that most people don’t talk about.”

DeGroat says through exploratory research, he’s identified five components of successful transition programs. Those include proper coaching, support throughout the process, the acquisition of new social skills and mobility skills to navigate life without institutional assistance, as well as the cultivation of self-realization skills to be able to form a new non-military identity.

“In my work over the past 15 years, I have found very few assistance programs that meet these five imperatives.”

DeGroat briefly mentioned some of the ways they seek to employ these through his work at K-State, noting that soldiers are encouraged to embed themselves in the social fabric of the university and tap into the ‘hidden curriculum’ of the college experience.

“I think, philosophically, we’ve succeeded in several decades of really broadening the experience of our veteran students from simply seeking a credential that they wanted for future employment.”

Sen. Jerry Moran (R-KS) thanked DeGroat for his presence and testimony, noting for the benefit of senators from other states the adjacency of K-State to Fort Riley.

“Where we have 15,000 active duty soldiers, there’s about 18,000 family members, 29,000 veterans and retirees,” Moran says. “It’s a significant component of our community and for Kansas State to take such an active role in this issue has a real consequence.”