On its 110th anniversary Saturday, the Polly Ogden Chapter of the Daughters of the American Revolution unveiled a new historic marker on Linear Trail to recognize the contributions and history of the Indigenous peoples of Manhattan and the Flint Hills.

The Polly Ogden Chapter is Manhattan’s local National Society Daughters of the American Revolution (NSDAR) affiliate, founded April 9, 1912 by Elizabeth Hoyt Purcell who named the chapter for her great-grandmother. The NSDAR was founded in 1890, a non-partisan volunteer women’s service organization with a mission to promote patriotism and preserve American history. Members are able to trace their lineage to someone who fought in the American Revolution.

The latest of the chapter’s projects is this historic marker acknowledging the archaeological discoveries of Indigenous farmsteads along the nearby stretch of Wildcat Creek dating between 1100 and 1350 AD. Fashioned out of metal, the marker is posted at Linear Trailhead southwest of Plaza West off of Anderson Avenue in Manhattan.

“Our efforts can never rewrite history,” says Regent Melanie Horton. “But we can help redeem some of what’s been lost and recognizing the land is an expression of gratitude and appreciation to those whose lands we reside on.”

The dedication ceremony opened with the pledge of allegiance and singing of the national anthem, with Horton expressing their gratitude to those who attended and hope that the marker will help inform residents of Manhattan today of the peoples who lived on this land for dozens of generations before European settlement.

“It’s important to know about the Indigenous history because it’s American history and we have neglected it for far too long,” says Horton. “By learning the cultures and histories of Indigenous peoples, we honor those histories and counter the narratives of discovery and colonial power that have been with us for as long as most of us know.

“But further we hope to honor the legacy, the rich culture and the knowledge that the Indigenous people have shared through the years.”

Horton says numerous people were involved in making the marker a reality and that work to that goal began in 2020. Kathy Dzewaltowski shared some of the lead up to 2022, saying the pandemic provided a lull in activity in which this project was brainstormed.

She says a small committee began to flesh out the idea, ultimately realizing their first step had to be contacting Dr. Lauren Ritterbush, Kansas State University professor of archaeology with an expertise in studying local Indigenous peoples of the past.

“Dr. Ritterbush was an invaluable resource to our chapter and helping us identify an appropriate site to recognize,” says Dzewaltowski. “Honoring an archaeological site is not as simple as one might think – if attention is called to an archeological site, it could lead to souvenir hunters disturbing the site looking for artifacts to take home.

“So based on Dr. Ritterbush’s recommendation, the Polly Ogden Chapter selected this area along Wildcat Creek to honor where Indigenous peoples lived and farm centuries ago and which unfortunately has been heavily developed in modern times, making it unlikely the area will reveal additional archeological information.” 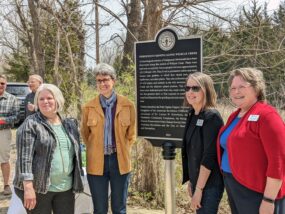 Dzewaltowski says the chapter is hopeful that people will notice and read the marker while enjoying Linear Trail and take the opportunity to imagine what the region would have looked like centuries ago. She also took time to recognize Pam Reisig, who in 2019 was appointed as chair of the DAR’s Kansas State Historic Preservation Committee before dying only a few weeks into her term.

That grant was also joined by support from the Greater Manhattan Community Foundation’s Community Grant Program, together contributing $2,300 to the project.

Ritterbush noted that archaeological evidence accounting for the ancestors of modern Native Americans has been found dating back at least as far as 16,000 years, though the evidence for this Wildcat Creek Valley community stems back around 800 years.

“It was a community of farmers. They had scattered farmsteads and they built houses that were sturdy houses out of wood and plaster that they lived in year round,” says Ritterbush. “They planted gardens and in their gardens they planted  things like sunflowers and squash, marshelder – these are some plants that are native to this area, but they’ve been domesticated even well before this community got established.”

Ritterbush encouraged people to envision the people’s lives in the valley, enduring humid summers and cold, windy winters and living on a mix of subsistence-based farming and hunting.

“I really appreciate the work that has been put into erecting this plaque, not only by DAR Polly Ogden Chapter but also the City of Manhattan who’s helped make that possible,” says Ritterbush. “And I hope you will take some time to imagine and remember, and also remember that these are the ancestors – the people that lived here are the ancestors of people who are still here and with us today and that you’ll keep that always in your mind.” 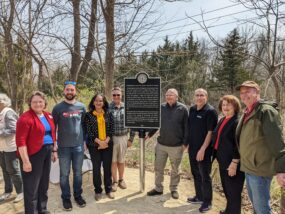 In addition to the DAR, almost all of Manhattan’s city commission was in attendance as well as the city manager and the director and assistant director of Parks and Recreation. Mayor Linda Morse expressed delight in the marker’s placement during her remarks.

“We are thrilled that you’re doing this here in Manhattan,” she says. “We need reminders of our history and we need to hear and see the reminders of the history of our Indigenous people.

“We know that things can get lost if we aren’t reminded.” 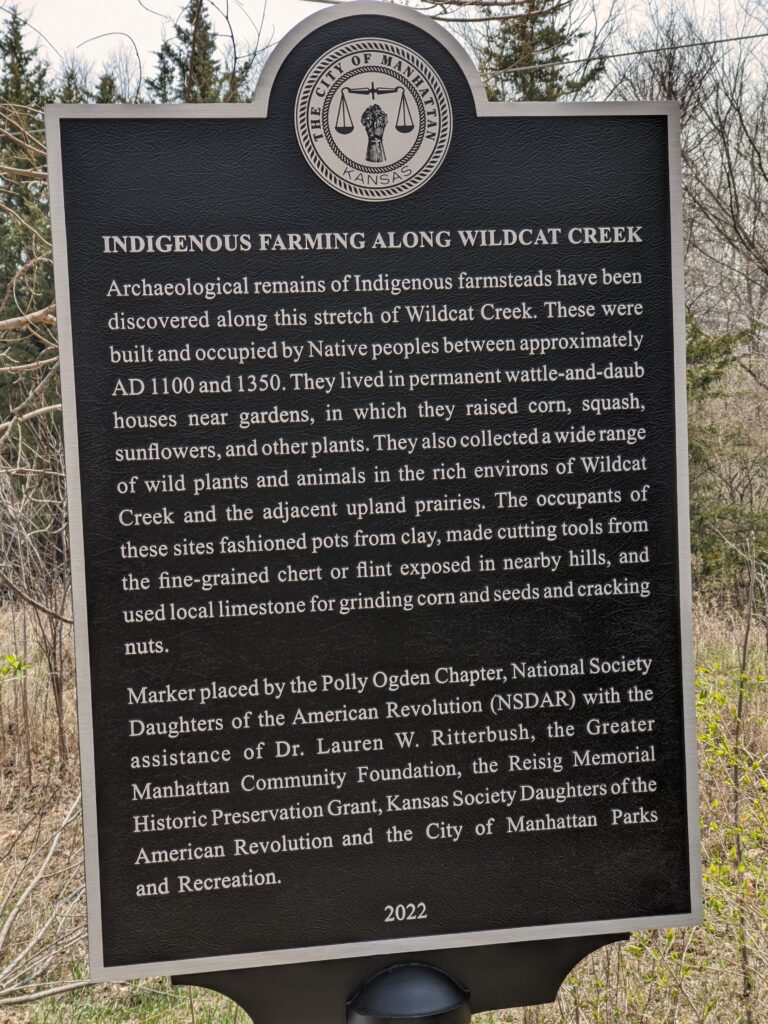