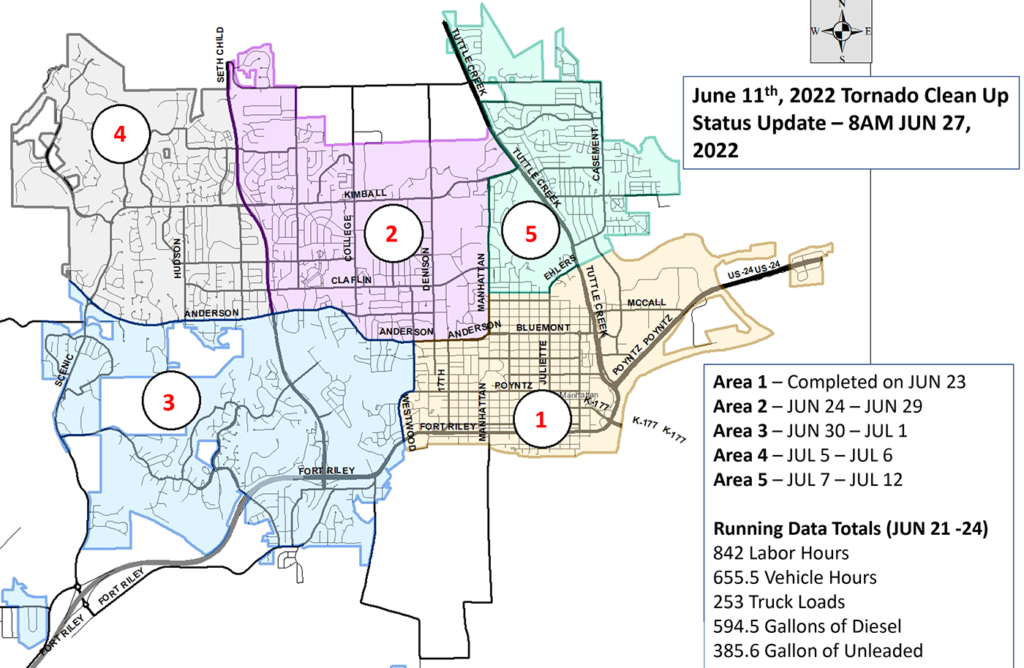 After multiple rounds of severe weather throughout June, significant tree damage has slowed City of Manhattan efforts to tidy up area Right-of-Ways.

Initially planned to take a week starting June 21st and rotate through the city as divided into 5 zones, crews took multiple days to get through zone 1 – which constituted the Ward or Southeast portion of Manhattan. Citywide cleanup efforts moved into the second zone on Friday, when they had initially planned to be entering zone four.

“It’s going to take probably into this week and possibly the following week just to finish it up. The two areas that got hit the hardest were the state streets and the ward districts. Northview actually got hit pretty hard with that second storm (June 21) that we got,” he said.

Manhattan hopes to be through all zones by July 12 at the latest. In the meantime, Wasinger says that’s slowed work on potholes around town – but once limb and debris collection is finished, that crews will return to normal operations.

A release from the city late Monday included some of the ongoing damage assessments, which are as follows:
June 23-24 Severe Weather Event: two structures were damaged after lightning sparked a fire at a duplex on Rosewalk Place and a tree damaged another in the the 600 block of Bluemont. No injuries or displacements were reported.
June 21 Severe Weather Event: Damage was heaviest east of Tuttle Creek Blvd and north of the intersection of Casement and McCall Roads.
*17 total residential structures sustained varying levels of damage. primarily from wind and fallen trees. Damage ranged from electrical services to severe roof damage.
*Nine single family homes and eight manufactured homes were damaged.
*Two single family homes were damaged from fires early June 22, caused by the storm.
*Three dwellings were vacated due to imminent safety concerns. The city says the Manhattan Fire Department is assisting displaced individuals by informing them and connecting them to community resources.
June 11 Severe Weather Event: MFD also found that an apartment building at 1431 Cambridge Place sustained significant roof damage from the June 11 severe weather event. That damage was not included in the initial assessments performed by City and Riley County staff.