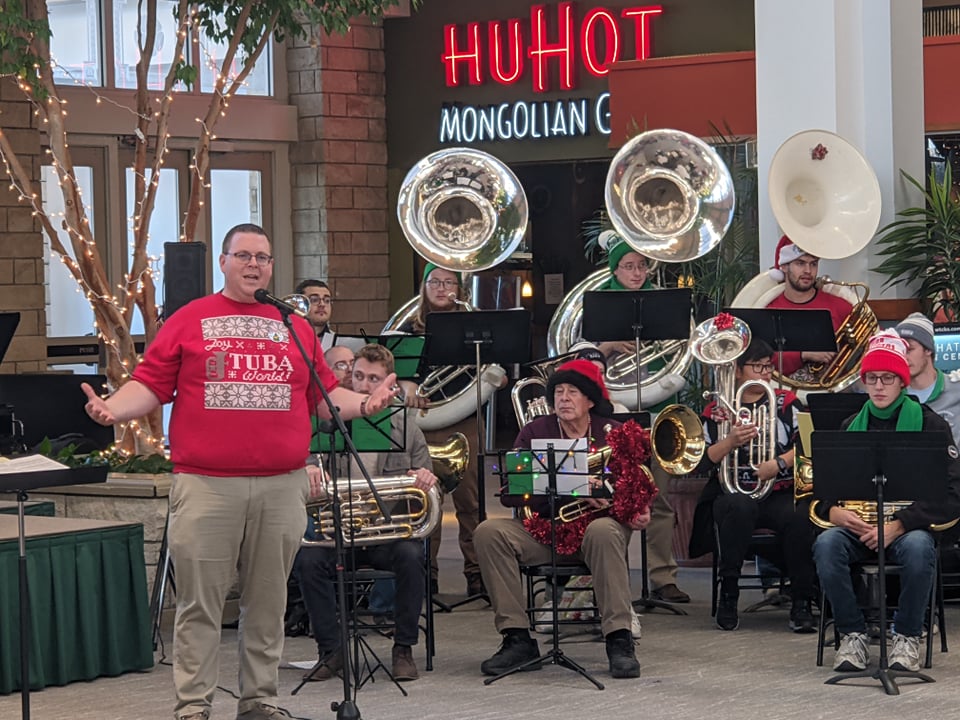 A 46-person ensemble of tuba, sousaphone and euphonium players brought the holiday spirit to the Manhattan Town Center Saturday.

The Manhattan TubaChristmas concert returned in 2021 after a year off due to COVID-19, playing an hour-long set of Christmas-themed songs. The event is organized by the K-State Tuba and Euphonium Studio and the ensemble is led by conductors Dr. Steven Maxwell of the K-State Tuba Euphonium Ensemble and Manhattan High School Band Director Dr. Joel Gittle.

“I think it’s been almost 35 years now it’s been going [in Manhattan],” Maxwell says. “I think I’ve been part of the directing part for 17 years now.”

TubaChristmas was brought to Manhattan by Chris Banner, but is an international phenomenon that began in 1974 Bloomington, Indiana. It was created by musician Harvey Phillips as a way to honor his mentor William J. Bell. The Harvey Phillips Foundation provides materials including songbooks to help with the organization of tuba-centric musical events around the U.S. and world.

“The tubas and euphoniums end up being sort of the back of the orchestra, the back of the band, and we play a lot of the Oompahs and big whole notes,” says Maxwell. “So why not give us a chance to play the melody and why not put it in place where we can make lots of sound and play in a mall.”

The band featured players of various ages, from older adults to high school students as well as a player currently in middle school. 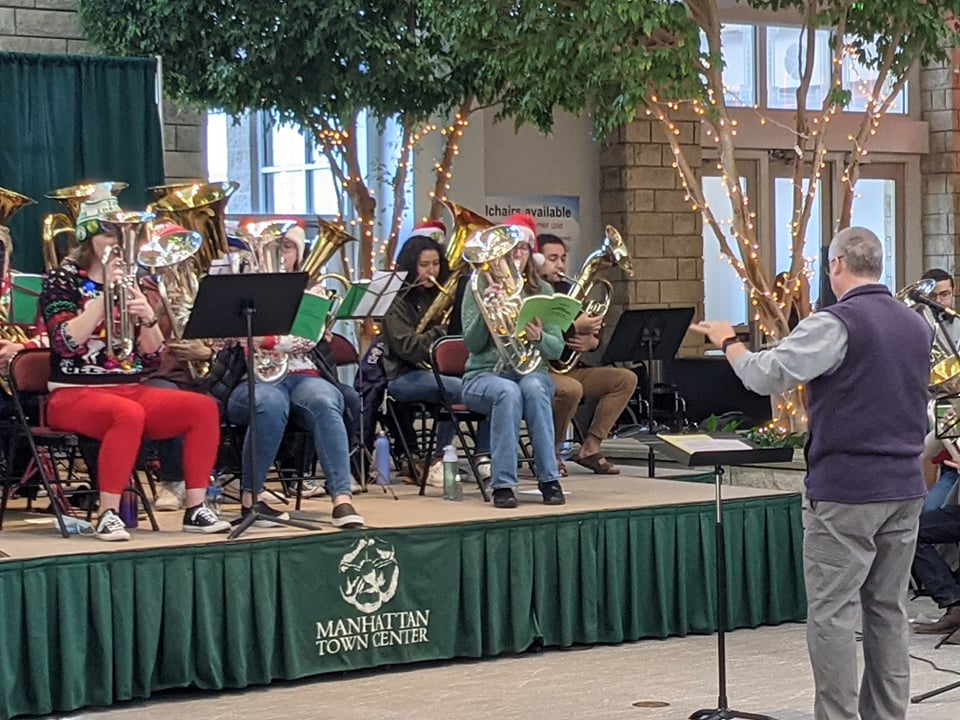 “It’s awesome,” Gittle says, now in his fifth year participating in the event. “And it kept getting bigger and bigger and bigger, and of course COVID set us back. So I’m sure Dr. Maxwell is hoping the numbers will come back again.”

Maxwell says the 46 participants rank right in the middle of sizes seen in the past, estimating the largest group to participate over the years has been close to 70 people.

The concert comes together with minimal preparation time as a group, which only rehearsed once together prior to the performance at 3 p.m.

“We got together at 1 o’clock today and we played through the music and then we’re playing for you here right now,” says Maxwell.

Maxwell says the biggest consideration is ensuring players don’t get too tired going from rehearsal to the performance.  A common thread binding all participants is a love for Christmas.

“How can you not like all these sousaphones and tubas and everything,” Gittle says. “The challenges are kind of over-weighed by all the good that goes on.”

For Maxwell, the concert is a great way for tubists and euphonium players to all get together.

“We never get together until this one time of year to get all these tuba and euphonium players together and baritone players.”