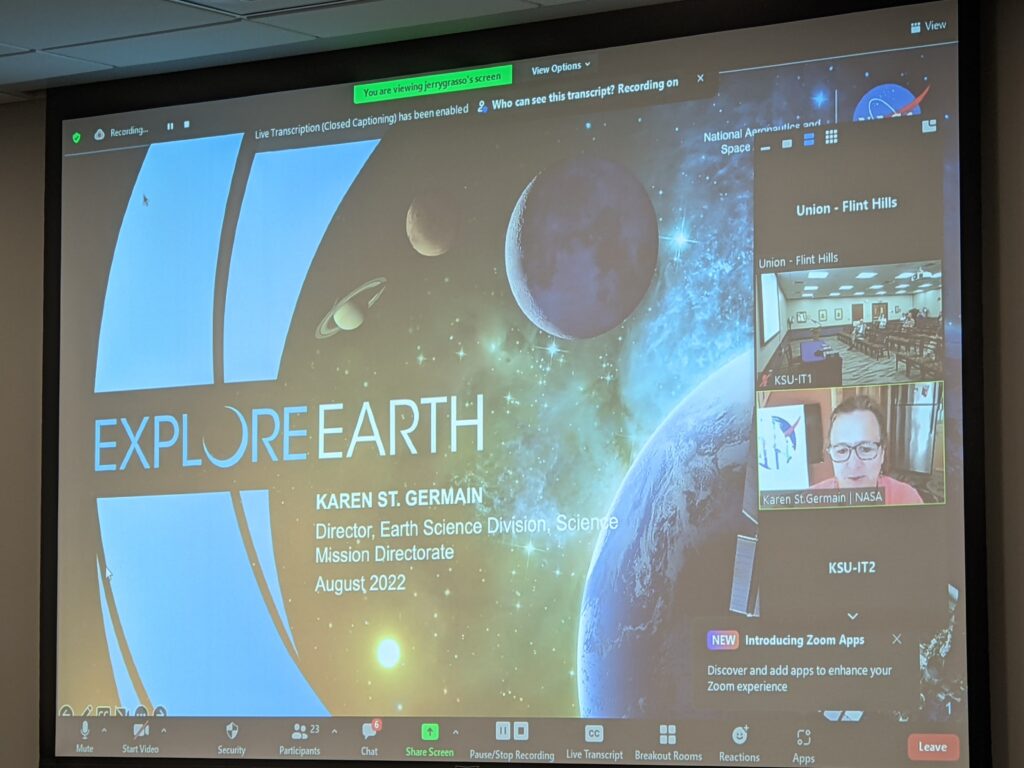 Members of NASA’s Earth Sciences Division capped off a week in Kansas with a Friday presentation at K-State detailing the administration’s work supporting agriculture and environmental research missions.

Hosted by the College of Agriculture, multiple officials from the division spent the week meeting with local agriculture producers and industry advocates throughout Kansas as well as Nebraska amid droughts in the two Midwestern states and around the United States.

St. Germain noted that while many will think of NASA in the context of space exploration, most of the administration’s work is focused on studying the Earth itself.

She called NASA’s work with agriculture researchers and professionals a natural partnership, adding that the data they collect in conjunction with colleagues at USDA and university-based scholars can be used to inform decisions from the macro level down to the field level.

“We are in it for the long-haul,” St. Germain says. “We think that it’s never been more important or more urgent to bring our data, information, technology and insights together with the great work that particularly places like Kansas State and the […] extension programs and the many producers that you work with to help us all prepare for a more prosperous and sustainable future.”

Over the course of about half an hour, St. Germain detailed numerous programs and products currently in use or development to track changing conditions in the environment and their potential to impact crop health and yields. The challenge, she says, is knowing what’s to come.

Largely absorbed into the oceans, she says this has been the impetus for changing weather patterns as well as intensifying the water cycle and causing more extreme weather – both in terms of precipitation and drought.

This is where NASA’s 24 orbital research missions come into play. St. Germain says these research satellites analyze the Earth system from the atmosphere to the land and seas using numerous methods, and says another launch is planned before 2023 with nearly a dozen more in production.

“The thing that’s really unique about this vantage point in space is that we can see how the whole Earth works as a system – and it really does,” she says. “What that means is what happens in one place changes what’s happening in another place.”

One of the missions St. Germain was most excited about was NASA’s Grace Mission, which employs a duo of satellites operating in tandem to detect small variations in Earth’s gravitational pull. Started in 2002, researchers can identify the changes in gravity through their effect on the distance between the two satellites which is then assimilated with data collected on the ground to monitor drought conditions from space.

“That gravitational pull changes when mass below the satellite changes, and mass changes largely when water content changes,” says St. Germain. “It can be in any form, ice or water; it can be in the form of soil moisture, moisture down in the root zone, or even water in an aquifer.”

She further highlighted an experimental product under development during Friday’s presentation, one that is intended to provide a 14-day look ahead projecting likely soil moisture conditions. St. Germain says while still in the prototype phase, the modeling product has shown promise when compared with actuals.

“We’ll be looking to improve this over time because one of the things we’ve been hearing over the past week and previously from producers,” says St. Germain, “is if they had a look-ahead in the neighborhood of 14 days for soil moisture […] that could really help them make the kinds of decisions they have to make with regard to water management.”

Other products detailed in the presentation utilized crop growth models that take into account the plant genotype as well as management approach by producers at the County level and environmental impacts – which St. Germain says gives researchers the ability to input different environmental factors in order to predict their impact on things like crop yields.

College of Agriculture Dean Dr. Ernie Minton closed out the presentation by thanking St. Germain and Doorn and others for engaging with K-State and producers around the state, saying it feels like the start of a new era of interaction with NASA.

“I think it just points broadly to the emerging role of the land grant universities interacting with […] federal partners to really solve problems,” Minton says. “It’s just kind of fun to imagine that the writers of those original pieces of legislation, kind of thinking about the role of land grant universities in their various states, couldn’t have imagined how this kind of interaction could evolve to support food agriculture and the well-being of humanity globally.”