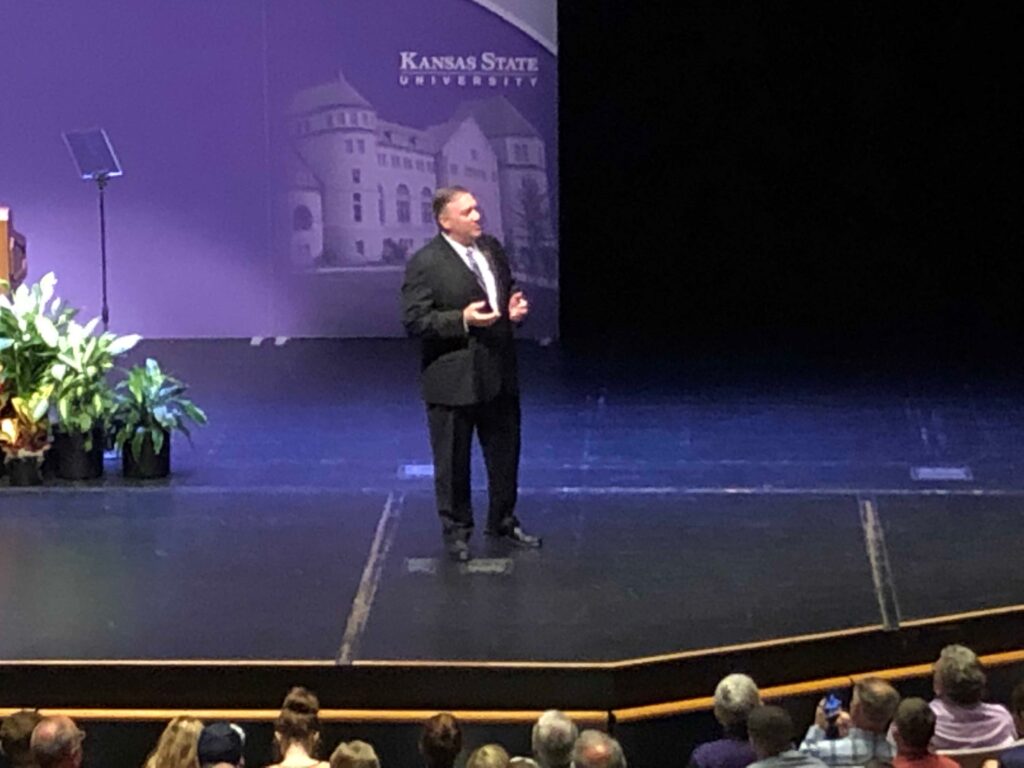 The 190th Landon Lecture was delivered Friday by US Secretary of State and former Kansas Congressman Mike Pompeo.

Speaking for about 20 minutes to a packed house at K-State’s McCain Auditorium, Pompeo spoke about refocusing American diplomacy on the promotion of unalienable human rights. He described politicians as framing pet causes as fights for “rights” to bypass the normal political process. By doing so he says the lines have become blurred from the distinction between fundamental, universal rights and mere political or personal preferences.

Pompeo says just because a treaty or law says something is a right, doesn’t make it an unalienable right, using the Xinjiang Province in western China as one example of corrupting the understandings of unalienable rights.

Pompeo says China is “crushing human rights in the name of saving them,” going so far as to introduce a resolution calling for nations to work together to promote mutually beneficial cooperation in the field of human rights. The U.S. was the only nation to oppose the resolution, which he says showed the U.S. must reclaim the tradition of unalienable rights from deliberate misunderstanding and cynical abuse.

He added that while the U.S. has had an imperfect record, unalienable rights have been the guiding principle for shaping foreign policy, a reference to the United Nations’ Universal Declaration of Human Rights, signed in 1948.

Pompeo launched a State Department commission on unalienable rights back in May, grounded in the nation’s founding principles and the principles of the U.N. Universal Declaration of Human Rights.

During his lecture and Q&A session, Pompeo made no mention of a speculated Senate run in 2020. Political experts say Pompeo would be the favorite in the Republican party if he entered the race.

Prior to his Landon Lecture speech Friday, Pompeo joined News Radio KMAN’s morning show and discussed some of his foreign policy achievements since being elevated to the Secretary of State role in April 2018.

There have been reports in recent weeks about the U.S. on the verge of a potential peace agreement with the Taliban, which the U.S. has waged a war with since the September 11, 2001 attacks on America. With the 18-year anniversary of those attacks coming up, Pompeo discussed some optimism that peace can be achieved.

As for the Trump administration’s approach to foreign policy, Pompeo says it’s a stark contrast from that of the Obama administration.

The full Pompeo speech from Friday’s Landon Lecture is below.