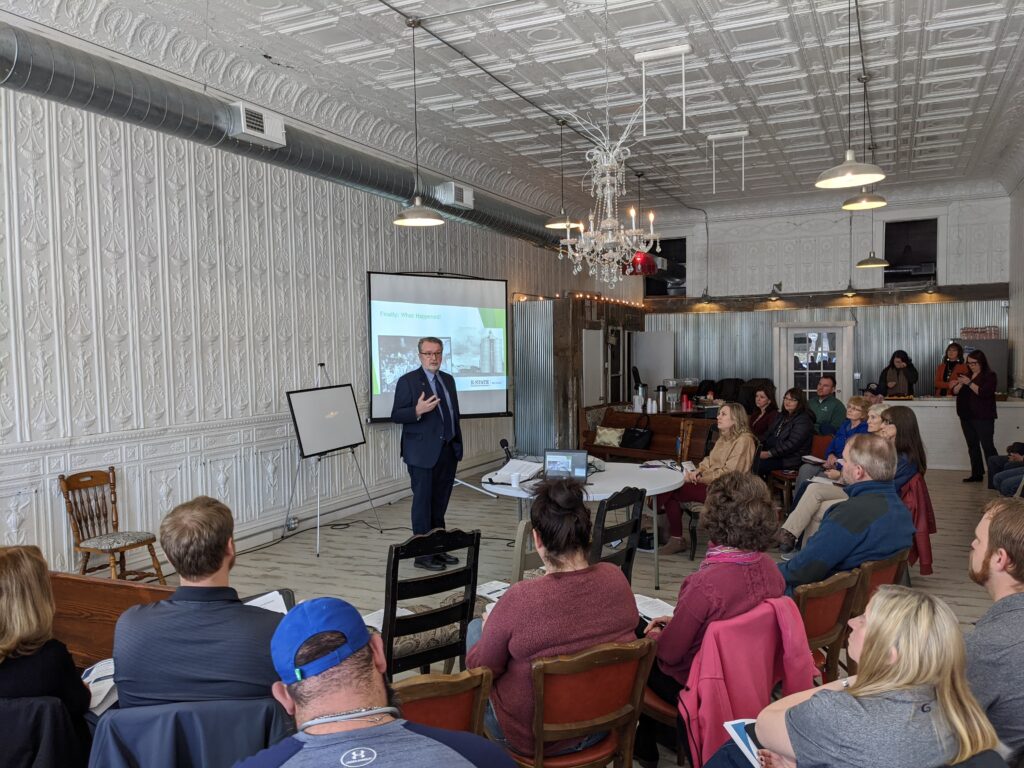 Lynn Rogers headlined the opening session at Frontage 109, which hosted the event titled Rural Revitalization Conference: Focus on Rural Entrepreneurship. Sponsored by the Riley County K-State Research and Extension, Leonardville PRIDE and others, the conference featured sessions touching on USDA grant and loan opportunities and starting a new business.

Riley County Extension Director Gary Fike welcomed those in attendance and set the tone for the event speaking about his home town of Ramona and the economic struggles it had over the years. 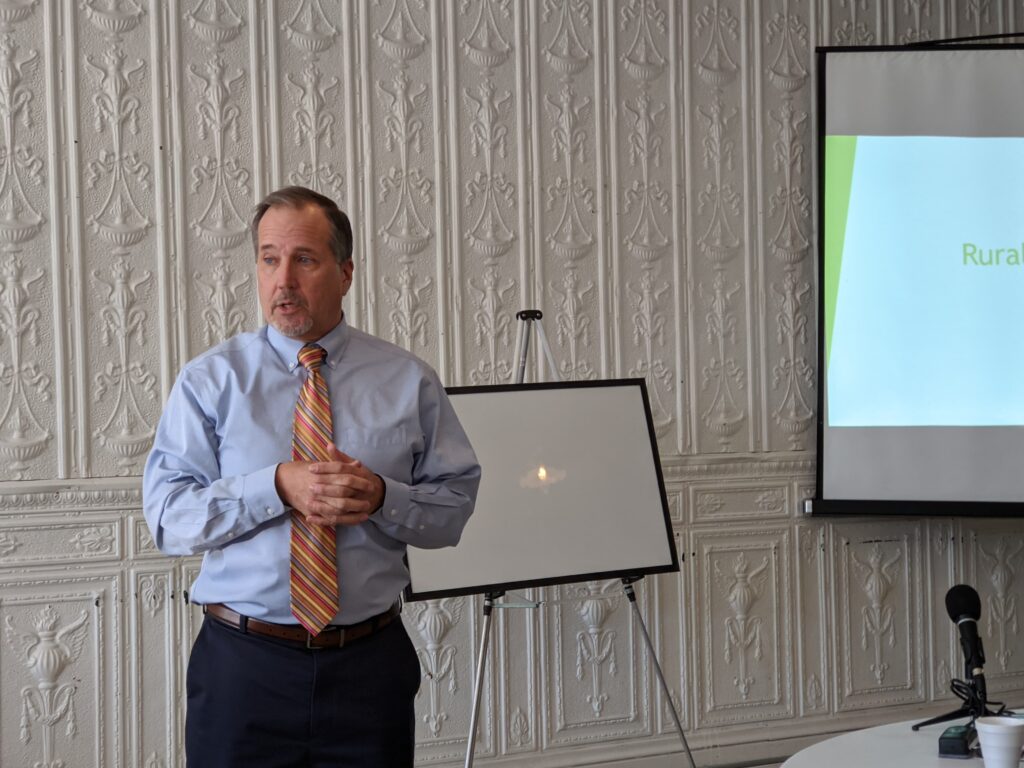 “So many of our rural towns have kind of just disappeared — we don’t want that to happen to Leonardville, Randolph, Riley or any of our other small communities,” Fike says. “The question is what happened — what  happened and how can we revitalize the communities we have and keep them alive?

Rogers spoke about the work of the new Office of Rural Prosperity (ORP), for which he has toured the state speaking with rural residents about successes and roadblocks to prosperity in their communities. He traveled through 44 towns and 23 counties in 2019 and released a report on what they heard. 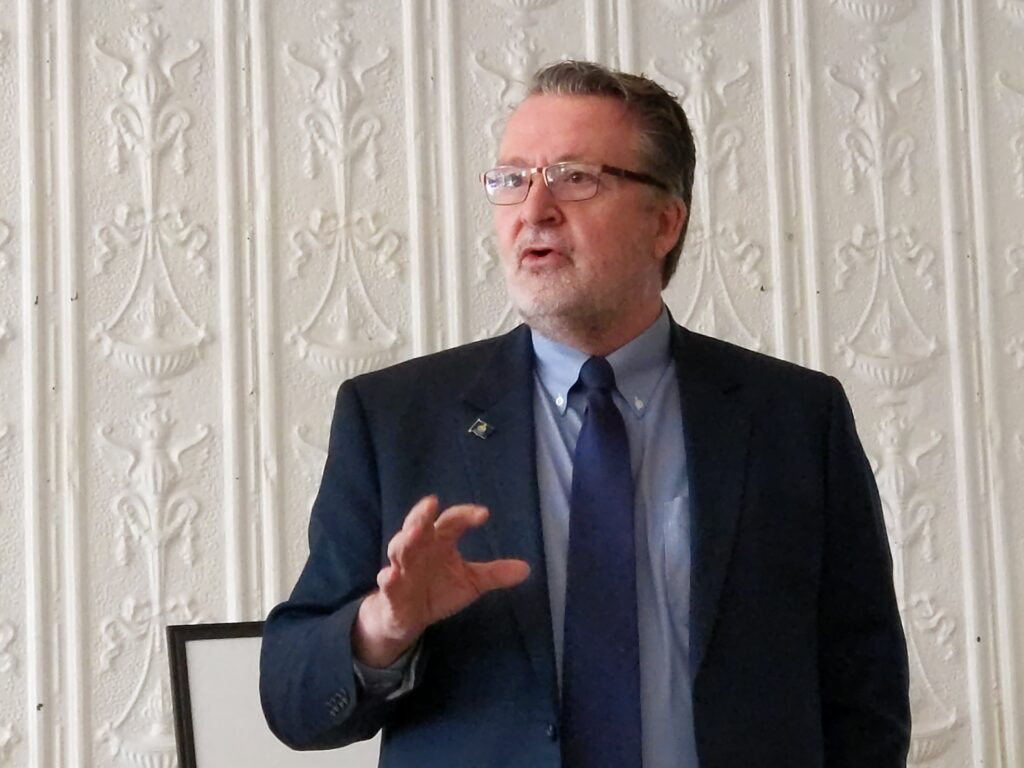 “We’re not trying to duplicate what’s already being done, but how do we put together the agencies that are responsible for those things and putting attention to them to make sure that we’re working on those,” says Rogers.

Among the top roadblocks to prosperity voiced by rural residents was poor broadband connectivity. Rogers says about 20 percent of Kansas does not have broadband access with higher rates within rural communities. He says they’ve taken a small step toward addressing the deficit with $5 million in grants available to rural internet providers through Gov. Laura Kelly’s ten-year FORWARD transportation plan.

“That’s not a lot of money,” says Rogers. “But this would be a plan where a local WiFi provider would put some funding in themselves, we’d put some state funding in, there may be some other groups that would match it, to expand where there isn’t broadband or WiFi now — we hope to see that happen throughout the state.”

Other issues raised in his travels were lack of housing, poor access to childcare as well as workforce deficits. At this point Rogers says the ORP has not cultivated any legislation addressing these specifically in rural communities, but is coordinating cooperation between different agencies working on the same issue. Specifically, he says in the coming weeks they will be bringing together 8 state and 4 federal agencies for a housing work group and 3 state agencies alongside community to work on rural childcare.

“We’re not sure if a lot of those groups have gotten together to sit around a table and talk about it before,” Rogers says. “We may discover other agencies that are concerned as well.”

Rogers says the ORP also makes a point of keeping rural Kansas on the minds of those in agencies and departments in Topeka as well as urban residents. He says often rural and urban residents share community issues and that its important to remind those in urban communities that rural prosperity benefits the entire state.

Rogers will embark on a second round of his rural listening tour this year. More information will be released at ORP.KS.Gov.

“Another big concern we didn’t necessarily highlight is leadership in these communities. Uh, some of the towns we were in the community leadership said they were very tired and they are wanting to transition. Sometimes younger folks aren’t so much willing to do it, but then I also have seen and heard from many younger people that older people don’t want to give it up. And so we’ve got to figure out how do we transition that? How do we build leadership? So these kinds of things really help that, uh, but we’ve got to figure out how do we, how do we make it work, uh, for the long-term.”

“One of the projects we’re talking about doing is to do a special contract, so to speak, with a group to go out and study young professionals in particular. You know, Marcy Penner has a group called Power Up, we’ve been talking to her about what kind of research can we do together. We’ve been talking with other groups, K state and whatnot to see what is out there — There’s not a lot out there necessarily. So we want to start identifying that and looking at it.

There were some interesting communities that were concentrating on recruiting people to their community and where they were focusing on wasn’t just the general public, but they were looking at their alumni. So, for instance, the hospital in Marysville, they find the young people in their county or the nearby counties that are going to medical school or think they’re going to when they graduate from high school. And then they, they actually track them through undergrad and medical school and stay in touch with them. Humboldt, Kansas, the city gives each of the graduating seniors a mailbox with their name on it and they encourage them to take it to college with them. They said, you can hold snacks in it or whatever, but we want you back. And I thought that was really interesting that they, they make sure that our young people know that there is a place for them. And we did discover lot of our young people don’t know that there are jobs or opportunities in rural communities. Rural communities, they have to do a better job of letting them know.

One of the things that we want to do with our website, we’re not there yet, but, we want to start highlighting what some of those success stories are and even some of these alumni stories so that other communities can use them so you don’t have to start from scratch. You know, if somebody has already done it why not at least learn what the pitfalls were? And even if it was a failure, find out why it was a failure.”

“We used to have the, what we call the three legged stool where we were kind of equal on each of the three sales, tax, property tax and income tax. And the property tax leg has gotten way out of shape. And a lot of times it’s because state funding. For instance, mental health services — we don’t pay for as much of that on the state now and our local County, many times law enforcement does. So we’ve got to get that mix back under control.

We had shared state revenue with local taxing authorities [in the past]. We’ve put in about a hundred million of that [in the budget proposal]to share back state revenues back with the local counties and cities for property tax relief. We don’t know where that’s going to be in the legislature, but we feel like that’s a starting point to start addressing that issue as well.”