Friday marks the fourth day of the typically five-day festival of Diwali or Deepawali, a celebration of renewals and festival of lights observed by millions of Hindus, Sikhs and Jains around the world.

A major festival across the Indian subcontinent, the holiday’s name is derived from the Sanskrit words “Deepa” and “Avali,” a reference to series of clay lamps traditionally used to decorate peoples’ homes. The festival has diverse significance across faiths and regions, but generally symbolizes and celebrates the triumph of light over darkness, good over evil, knowledge over ignorance.

This year, Diwali began Tuesday, November 2 and runs through Saturday. K-State professor Dr. Nikhil Moro says the third day is largely viewed as the most important.

“It’s called the Lakshmi Puja day,” Moro says. “That’s the day when the goddess of wealth and prosperity, Lakshmi, is praised and loved and propitiated.”

Lakshmi Puja falls on Amavasya, the day of the new moon. In addition to Lakshmi, many celebrants also view it as marking the return of Lord Rama and his wife Sita to the city of Ayodhya following a 14-year exile. Given the dark moon, his return is said to have been celebrated with the placement of earthen lamps (deepa) throughout the city.

“I remember when my kids were growing up here,” Reddi says. “We would celebrate Diwali at our friends homes and do little lighting things outside.

“And if anybody had sparklers, we would even light up sparklers.”

Though restricted in Manhattan, fireworks are typically ubiquitous in Diwali celebrations. Moro says fireworks are likely the most visible and audible way to celebrate the holiday. These days, Moro says he’s an opportunistic celebrant of the festival.

“Some memories I have [are]wearing new clothes, eating sweets, lots of laughter and camaraderie with friends, family, visiting other peoples’ homes.”

While Diwali in India and metropolitan areas in the U.S. can be massive public events, Reddi says celebrations in Manhattan have been traditionally more intimate in nature.

“Because it’s a small community we can have better conversations, stay together much longer and then carry on those relationships even after the event is over.”

K-State’s Indian Students Association is commemorating the festival in Manhattan with lamps and a potluck from 5 to 8 p.m. Sunday, November 7, at the Frith Community Center. That’s located at 2002 Tunstall Circle.

ISA partnered with Kansas Beats the Virus to spread awareness about COVID-19 vaccination and distribute protection kits at the event as well. 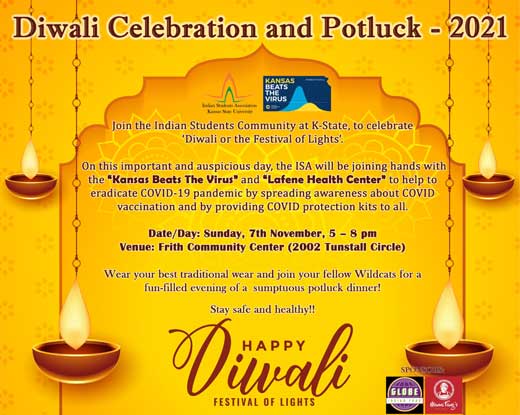