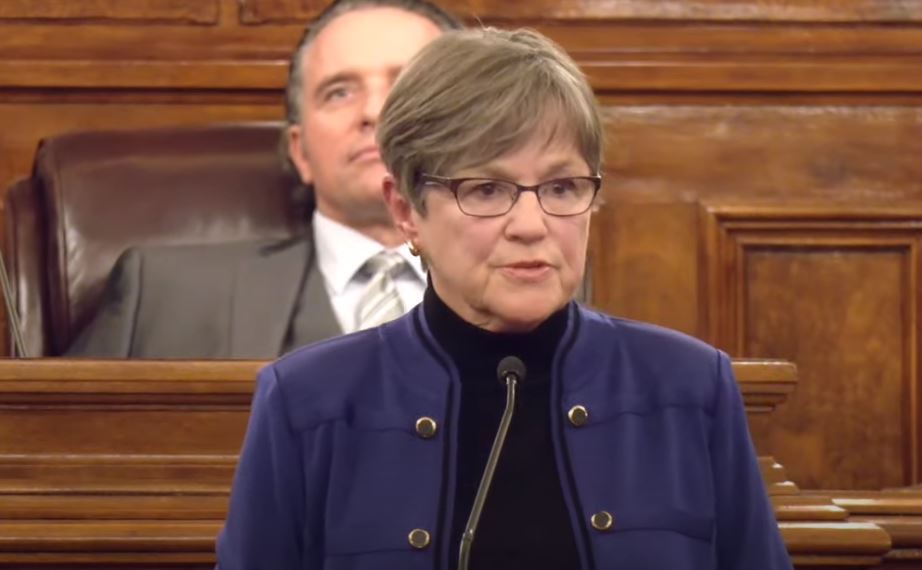 Gov. Laura Kelly called on state lawmakers to work together to ensure Kansas is the best place in America to raise a family.

“Continue to meet me in the middle. That’s how Kansans solve differences in their everyday lives, and it’s the only way we’ll solve the big challenges ahead of us,” she said.

The governor made those comments during her annual State of the State address Tuesday in Topeka in front of a joint session of the Kansas House and Senate.

Kelly outlined priorities for the 2023 session, including similar themes from her inaugural address such as fully ending the state sales tax on food, diapers and feminine hygiene products, implementing a 4-day sales tax holiday for back-to-school shopping, legalizing medical marijuana and a continued pitch to expand Medicaid, by drawing down federal funds to cover 150,000 vulnerable Kansans who don’t currently qualify.

“The argument for expansion is simple – and should be one on which we all agree. Regardless of
political party, we all want our rural communities to be hubs of commerce and economic
activity,” she said.

Kelly touted the success of the recently created Office of Rural Prosperity with a focus on improving economic conditions in rural parts of the state. The governor also continued calls to fully eliminate the sales tax on food, which isn’t scheduled to be fully off the books until 2025.

“There is no reason that Kansans should ever look down at their grocery receipts and see this tax. Folks can’t afford it. Folks don’t deserve it. There’s no need to wait until 2025. Let’s end it now,” she said.

Senate President Ty Masterson delivered the Republican response, which included how the GOP differs from the governor on the issue of Medicaid expansion.

“Republicans support healthcare freedom and expanding access to affordable care through cost transparency, more competition, less governmental regulation over your consumer choices. This can all be done while preserving a safety net for those in our society who are most vulnerable. Unfortunately the governor’s party remains focused almost solely on government-run healthcare, which could dramatically expand the administrative state and harm the very people the Medicaid safety net was intended,” he said.

Masterson also expressed skepticism over whether the Democratic governor will live up to her promises to work with the Republican-controlled legislature.

“On many issues, the governor’s party has her walking down the far left lane, if not the ditch outside of that. With how many times we’ve heard her tell us she’s in the middle, this session we’ll give her ample opportunity to show she really meant it,” he said.

Gov. Kelly also continued to push to fully fund K-12 education, promising to reject politically motivated legislation that pits parents against educators, throwing back to her veto last year of a proposed Parents Bill of Rights.

“I will oppose any efforts that are designed to turn parents against teachers… to turn
communities against their schools… to turn young people away from the teaching profession. I
will resist politicians who want to score political points at the expense of our students and our
families. Our students should not be used as political pawns. Not ever,” she said.

There were some signs the two sides could find common ground, particularly in the governor’s proposal to raise the income threshold for Kansas retirees to avoid paying state income tax on their social security. That is currently capped on seniors making $75,000 or less.

“Let’s ax that tax cliff and raise the threshold to $100,000, so more of our seniors can enjoy their retirement,” she said.

Masterson said the GOP supports this effort and will work with her office on the matter. Still, other areas remain points of contention, including abortion rights.

“We desire to reduce the number of abortions by promoting adoption, expanding availability of crisis pregnancy centers and preserving our common sense protections currently in law — all of which are currently under attack. In stark contrast, the governor’s party remains devoted to taxpayer funded abortion on demand, allowing the most inhumane procedures up to, and even past the moment of birth,” he said.

Video and text of the governor’s full speech is available below.