Amid circulating rumors on social media, the Manhattan Mercury has confirmed the identity of a K-State football player wounded in a Sunday shooting in Aggieville.

According to the Mercury, 24-year-old Reed Godinet suffered a gunshot wound during the incident that occurred in Tate’s Bar just before 1:30 a.m. The senior defensive end graduated with his bachelor’s degree in communication studies last week. 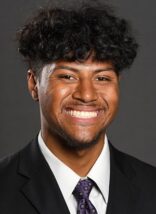 Godinet and a second 24-year-old man were injured in the violence, with the unnamed victim reported to have suffered a concussion. The two were transported to Ascension Via Christi for treatment, with Godinet ultimately being life-flighted to Stormont Vail Hospital in Topeka for further care.

Riley County police are continuing to investigate the crime and search for the shooter. RCPD asks that anyone with information, pictures or videos from the incident to contact Detective Janelle Compagnone at 785-537-2112, extension 2301.