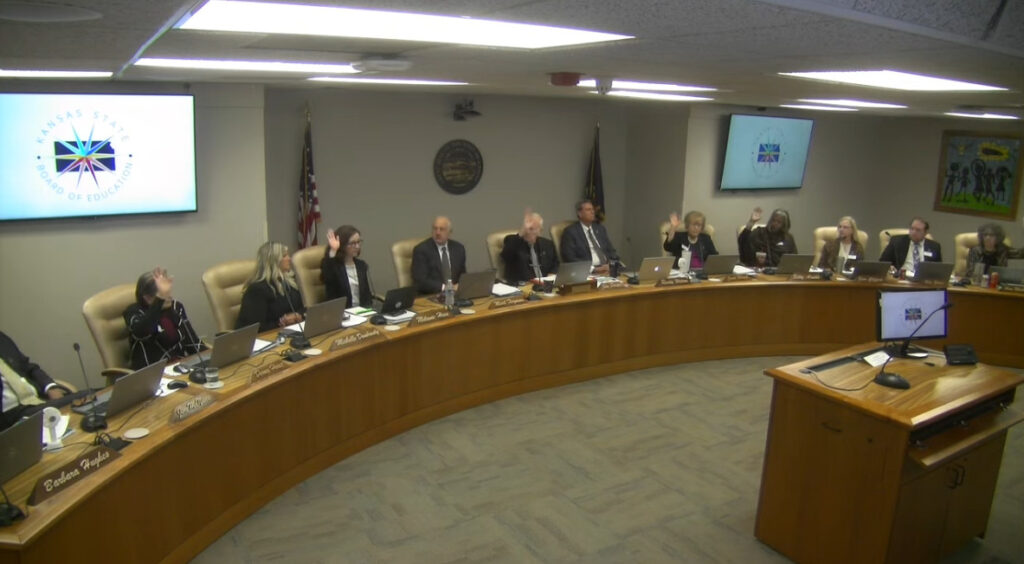 The Kansas State Board of Education wants to see Native American mascots in non-tribal K-12 schools retired in the next three to five years.

“I’m shocked that we didn’t hear of this before, we should have known this a long time ago to be honest with you,” says Janet Waugh, representing District 1 encompassing Riley and Pottawatomie Counties. “I’ve been here 24 years and this is really the first time this issue has ever came to us.

“I think this is tragic that these things have happened, and I apologize that they have; I think that it’s very sad.”

The Board Thursday voted 7 to 1 with 2 abstentions to affirm and approve a formal recommendation to that effect proposed by the Kansas Advisory Council for Indigenous Education. The advisory council was created as a temporary body intended to build better relationships with Kansas’ four federally recognized Native nations as well as examine and propose reforms to better indigenous educational outcomes and experiences. It included representation from each of those nations as well.

“This is really the start of the work,” says advisory council member Dr. Alex Red Corn, a professor of educational leadership at K-State and member of the Osage Nation. “This is the start of the dialogue, the initiation of that dialogue, where people actually start to learn about these things.

“Once people start actually learning and peeling back the layers, that’s when the actual change starts to occur.”

The vote coincides with a planned local dialogue on the issue in relation to Manhattan High School’s ‘Indian’ mascot. The MHS Engagement Club has a deliberative discussion on the school symbolism scheduled for Nov. 28 in Rezac Auditorium. Conversation around retiring the mascot has repeatedly come up in Manhattan, though never with enough support to prompt the Manhattan-Ogden school district to make a change.

The advisory council in October presented their recommendations to the State Board, encouraging the body to strongly recommend local school districts begin the process of retiring Indigenous mascots and highlighting research indicating Native mascots negatively impact the educational experience for Native American students and non-Native students alike. Discussion at that meeting detailed research as well as personal experiences of hostile environments for Native students, particularly in the realm of athletics and sporting competitions.

Board member Dr. Deena Horst, representing District 6 encompassing Geary and Wabaunsee Counties, says though she agrees the decision to change must be left to local boards that the time for conversation is long past. She says though a proud Clearwater High ‘Indian,’ hearing of the impact of Native-themed chants and gestures at sporting events led to her support of the council recommendation.

“It’s a way to show that you can overtake someone else and that makes the person who actually is a Native American, if it makes them feel less of a person because of that it’s wrong,” says Horst.

The recommendation does not mandate school districts make such a change, and does not hinge accreditation on the matter. Red Corn says the recommendation, though, does include guidance for those districts with Native mascots that have formal written agreements with Native nations and include substantive learning about the nation in their curriculum.

“We also wrote in the recommendation that we’re willing to engage in those conversations,” he says. “That really is a lot of labor to go to all of these communities and do this work, but we feel passionate about it.”

Abstaining were Board Members Ben Jones and Jean Clifford, with Michelle Dombrosky constituting the sole opposing vote. Dombrosky expressed uncertainty as to why the matter was being considered at the State level, saying it will take significant relationship building with local districts to affect change. She also recounted a conversation she had with a Native friend with similar sentiments, questioning the potential negative reaction the vote could instigate.

“It’s putting us in a bad situation where then I’m going to have to go out and defend a vote on something that’s only a recommendation,” she says.

Clifford felt similarly, saying the matter should stay at the local level rather than the State level.

“I think there is a lot of valuable information in the statement that districts can and should consider,” says Clifford. “But at the end, this is the districts’ decision.”

Concluding the conversation, Board Chair Jim Porter thanked the council for their work and expressed his hope for conversations to begin and spark change around Kansas.

“And if we don’t do something, we know nothing is going to happen.”