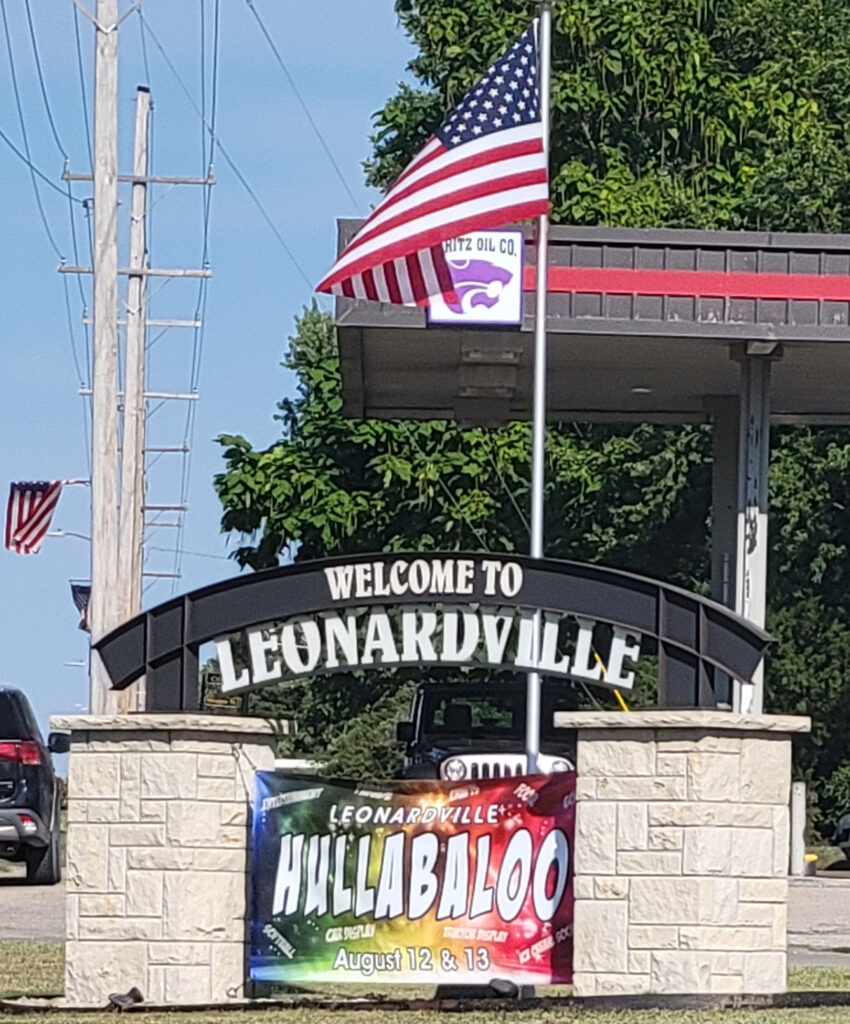 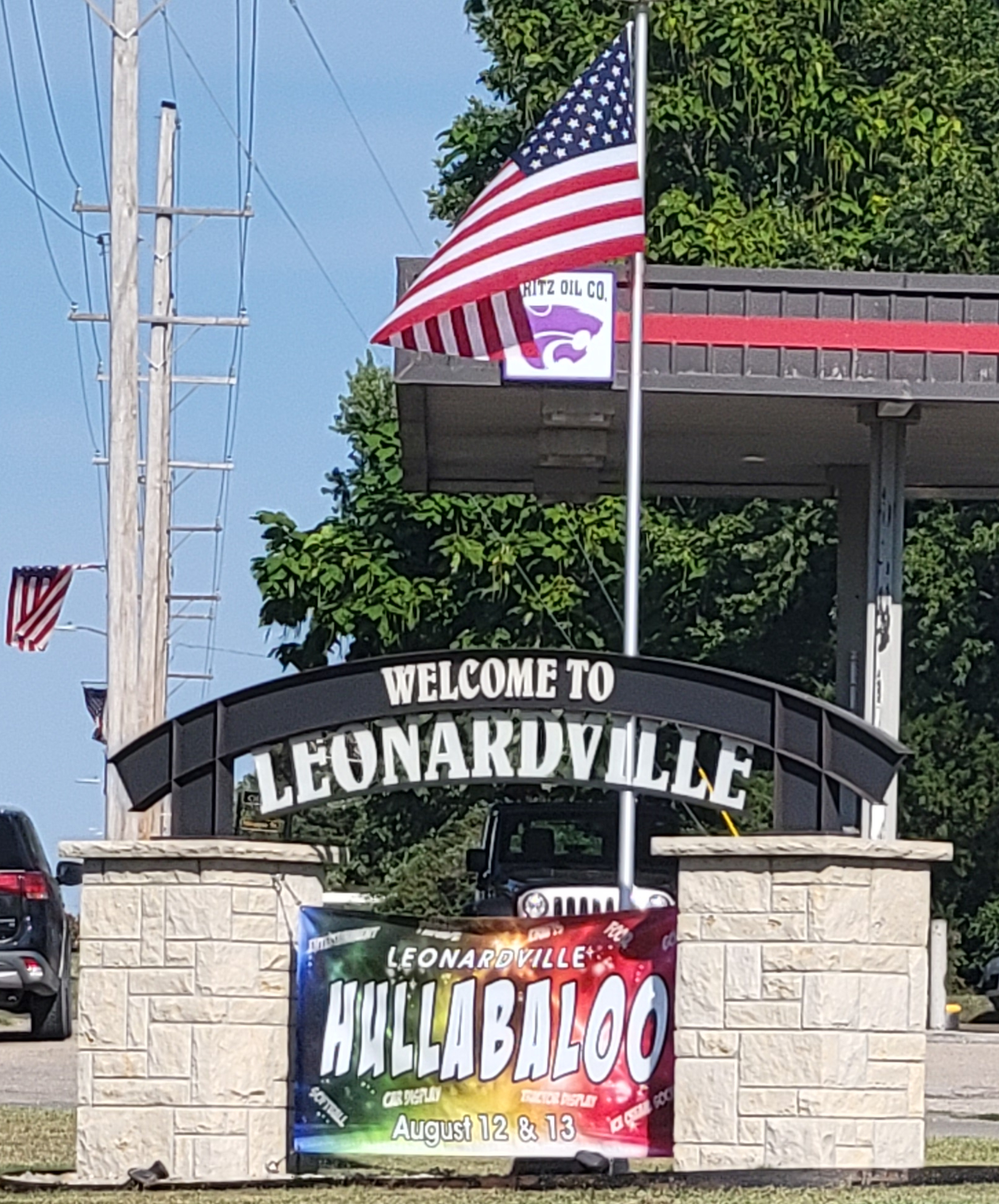 Kansas Pride is a program dedicated to serving communities across the state to encourage and assist local government and volunteers in making their community a better place to live and work. Local communities identify what they would like to preserve, create, or improve for their future. Saturday, Leonardville Pride hosted their 2022 Hullabaloo, and to great fanfare. Here are just a few of the highlights.

Riley County Fire District #1 hosted tours of their equipment and station located in Leonardville. There were free activities for children, such as practicing with a hose to protect a miniature house. They also gave people three chances to dunk a firefighter or a reporter for a $1 donation. The proceeds help support the Riley County Firefighters Association that pays for awards and their yearly firefighter banquet. 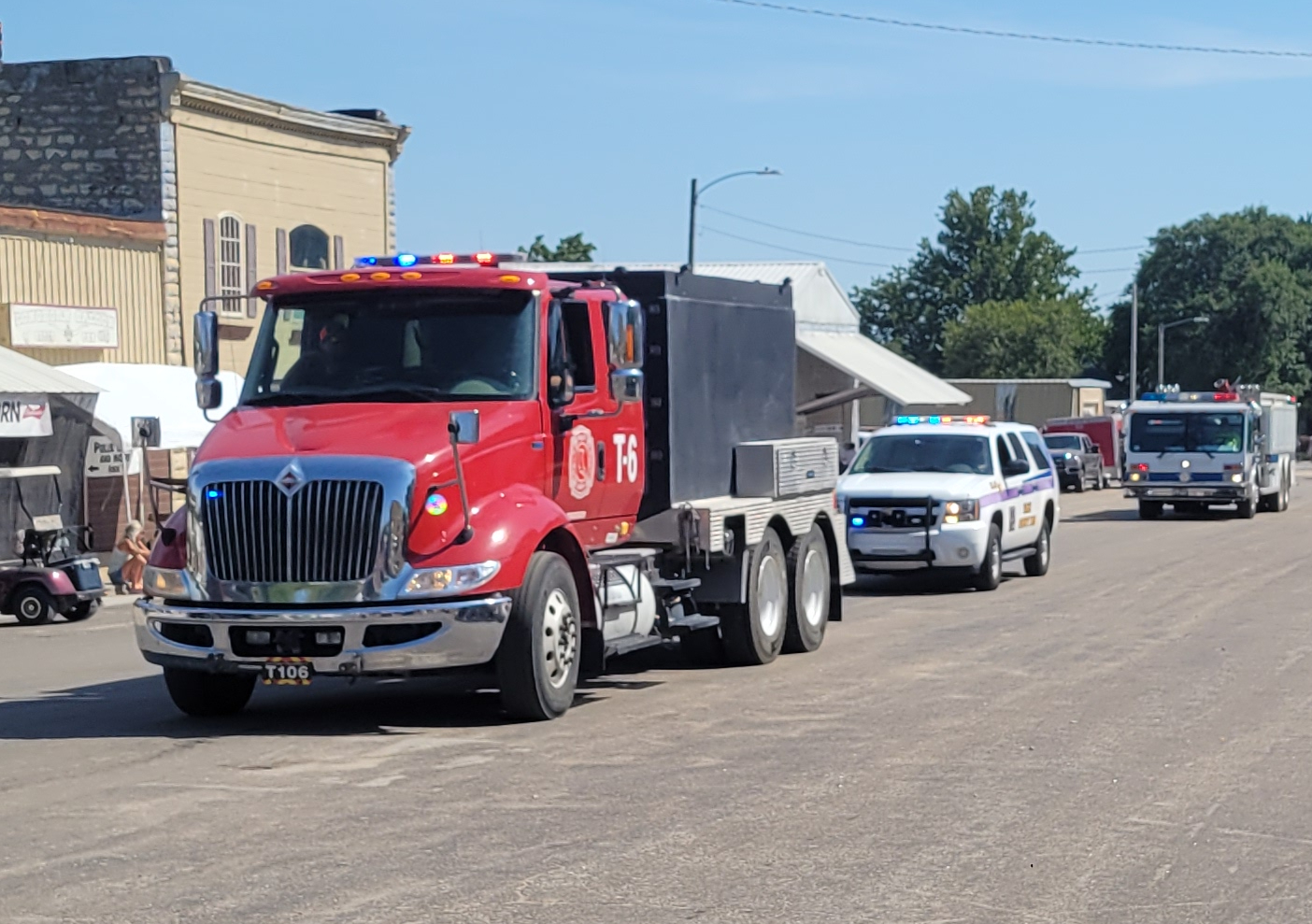 The Lions Club hosted an ice cream social. They also sold slices of homemade pie with a scoop of ice cream, although the scoop may have actually been a bowl. The strawberry rhubarb pie was fabulous. They also showed off their disaster relief van. 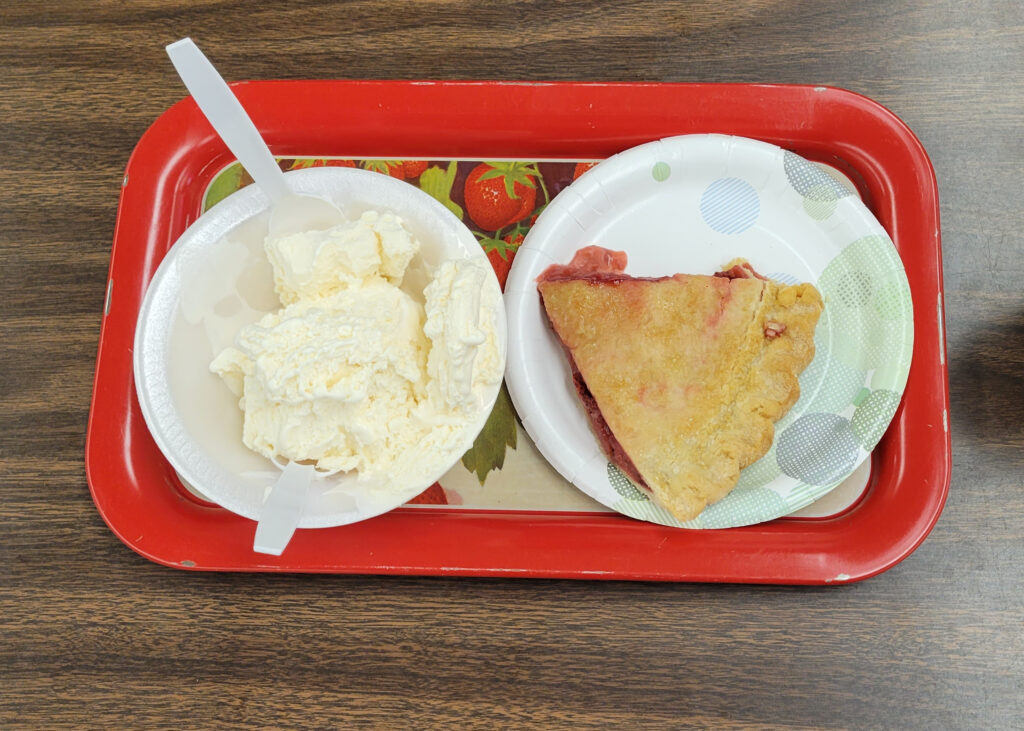 Harold Daniels’ slide collection was shown throughout the day and was in an air conditioned building, which was a welcome break from the sunny day. There were also many historical documents displayed. 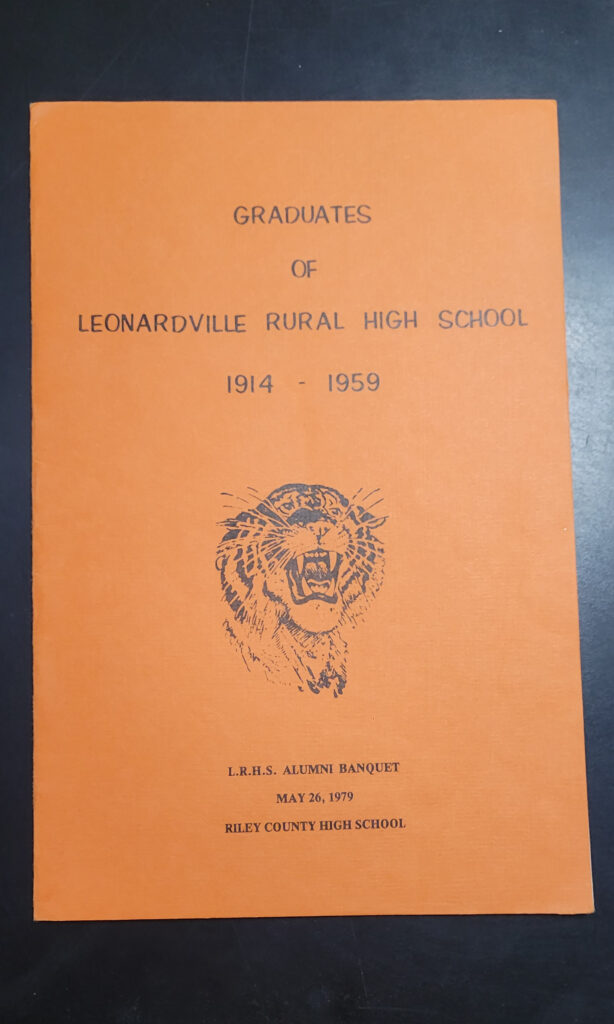 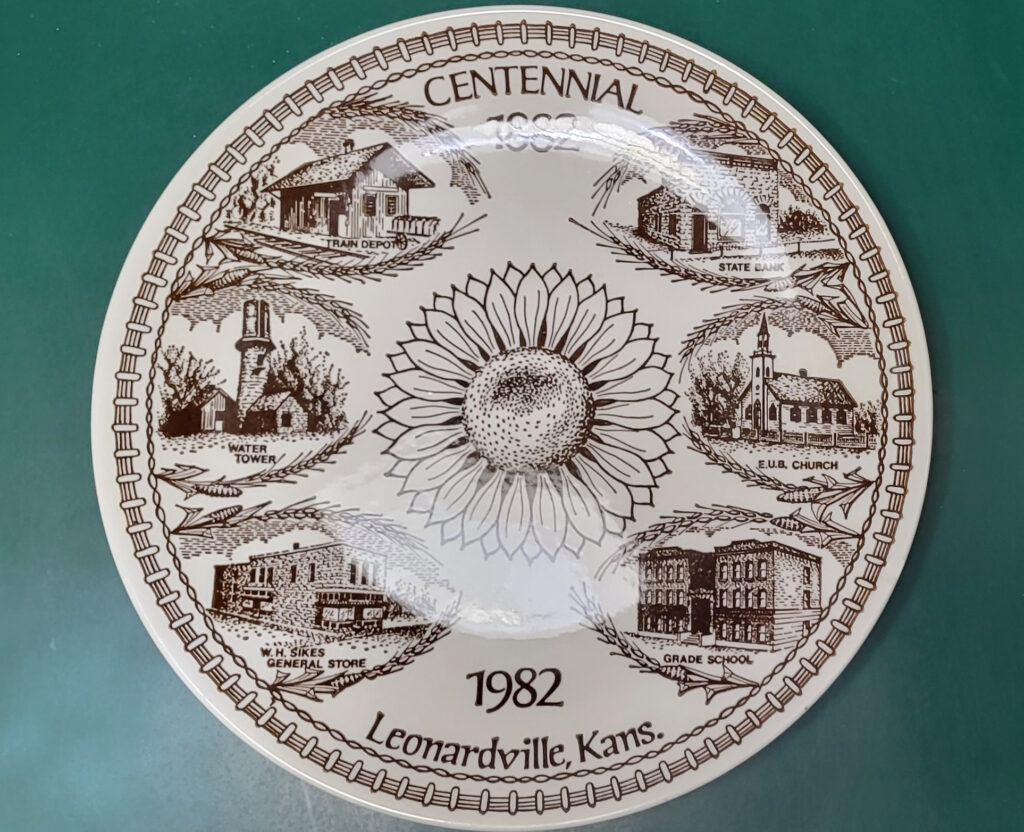 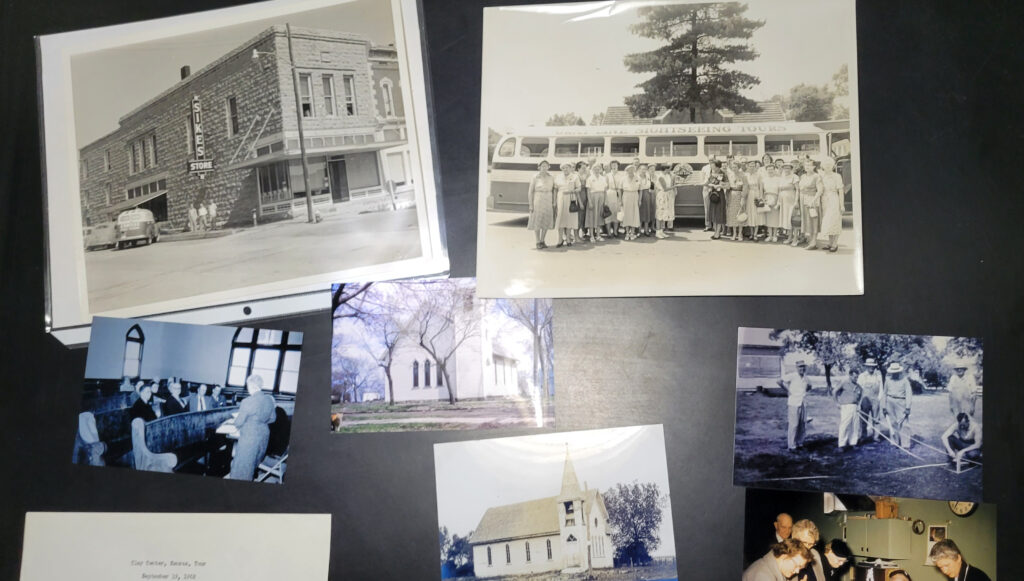 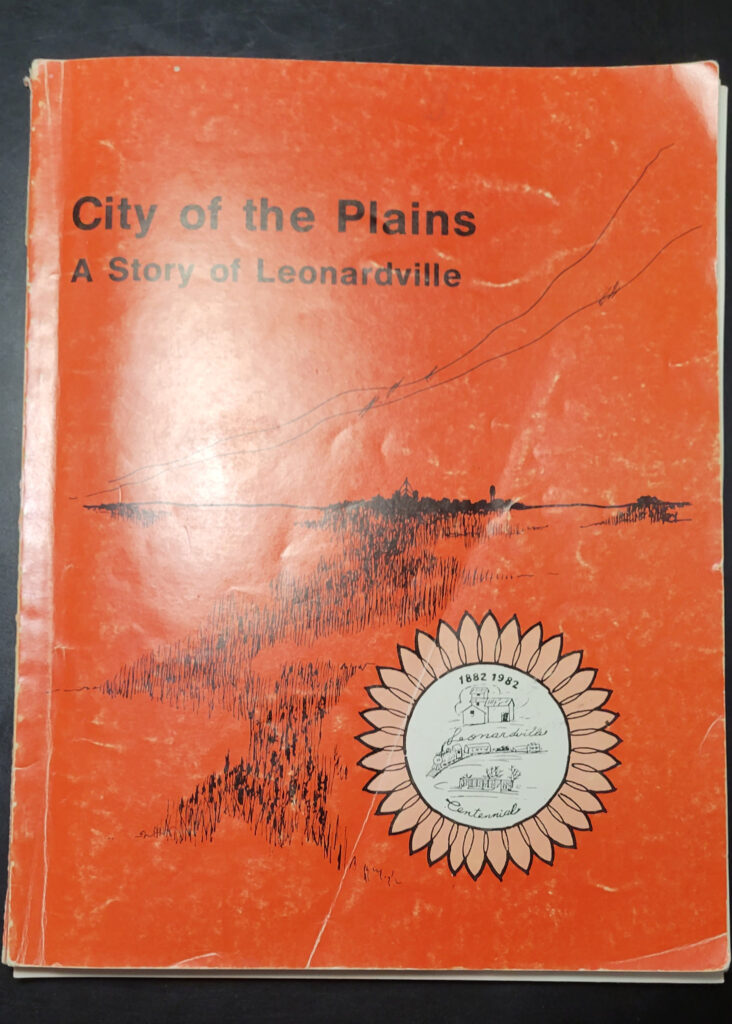 The hottest part of the day was reserved for the parade. It was more than half an hour long, and drew a large crowd. The parade started with a Riley County Police vehicle, followed by the 1st Infantry Band, with veterans presenting the colors at the beginning of their formation. They stopped in front of the Parade Announcer, Kevin Larson, who is originally from Leonardville. The crowd stood to pay respect to the American Flag while Dale DuBois, from Junction City, performed a beautiful rendition of the national anthem. Once the parade resumed, kids on bikes and other wheeled vehicles led the parade through town. Behind them were classic cars and other antique vehicles. 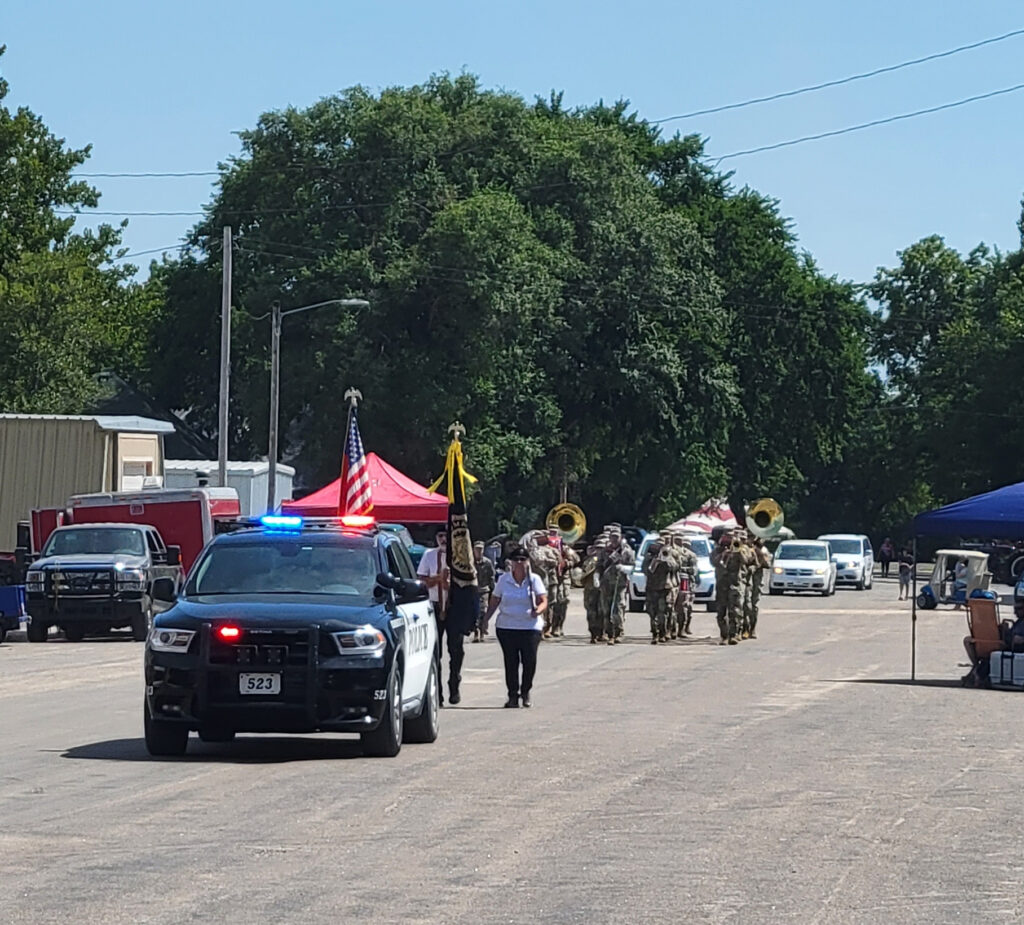 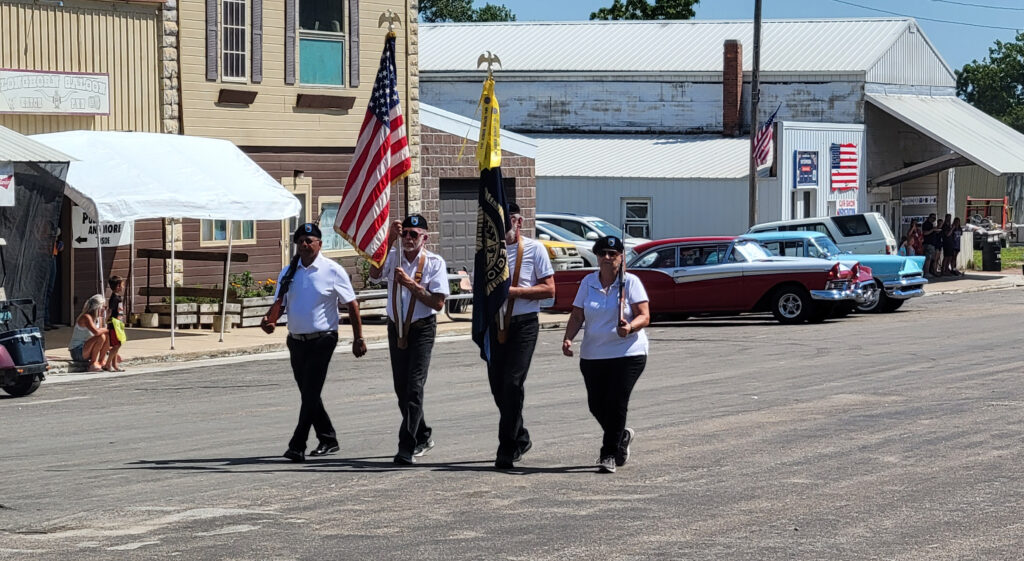 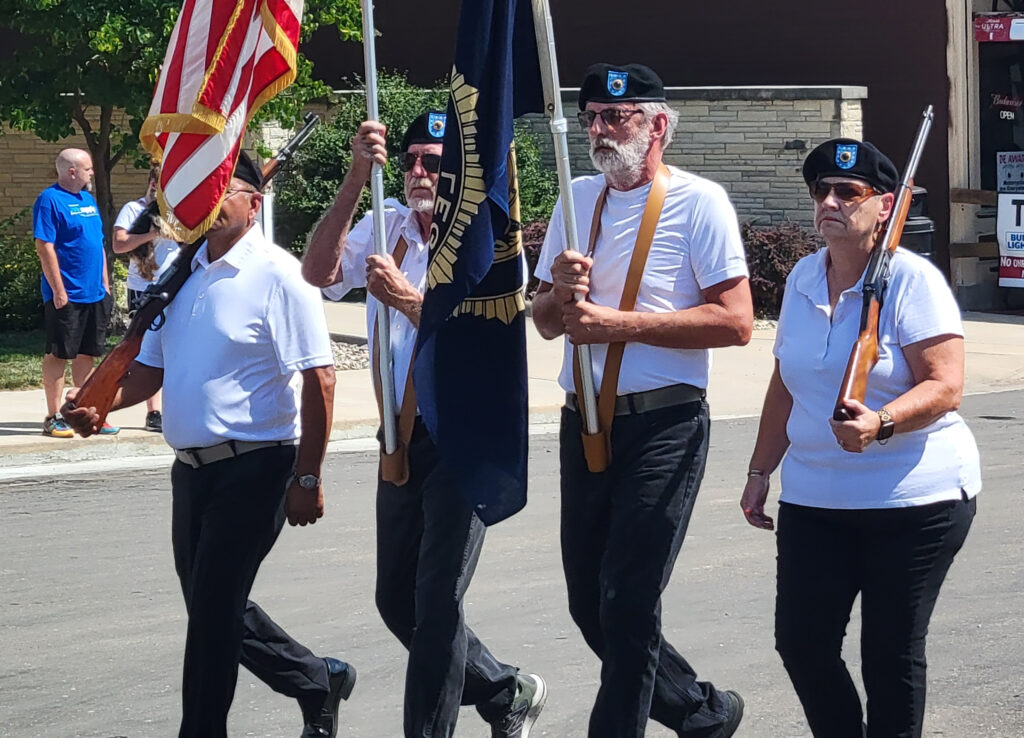 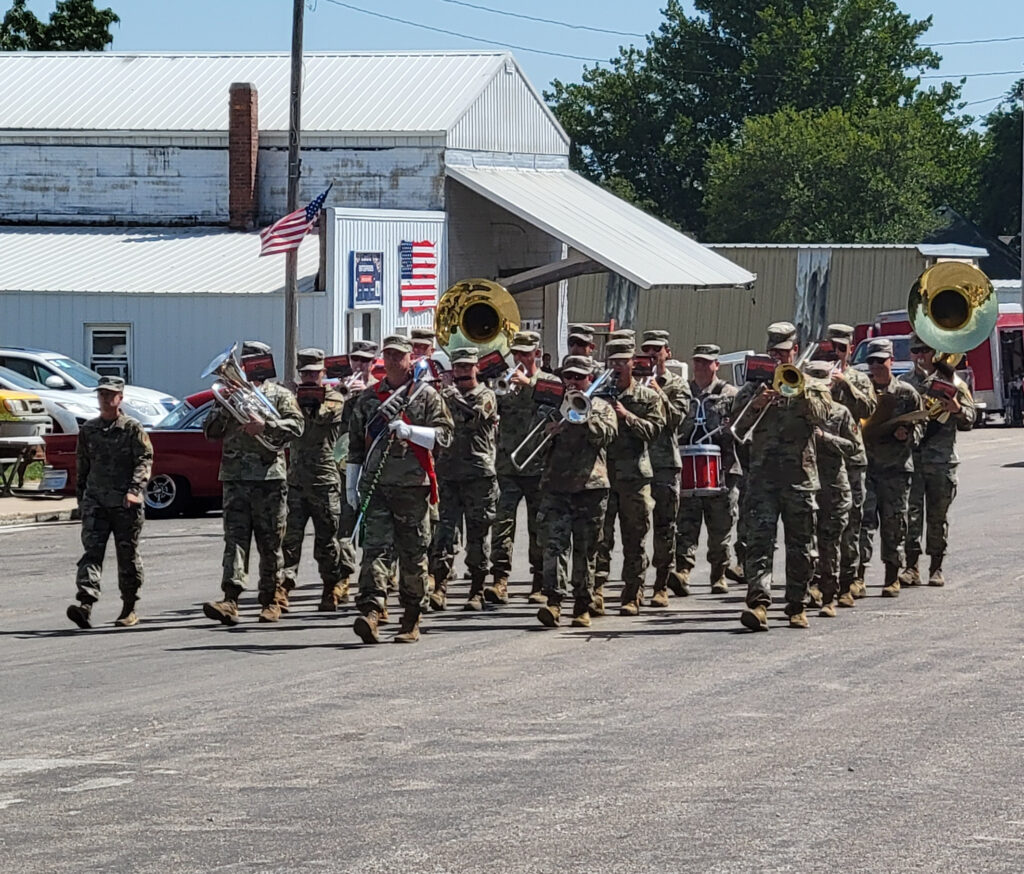 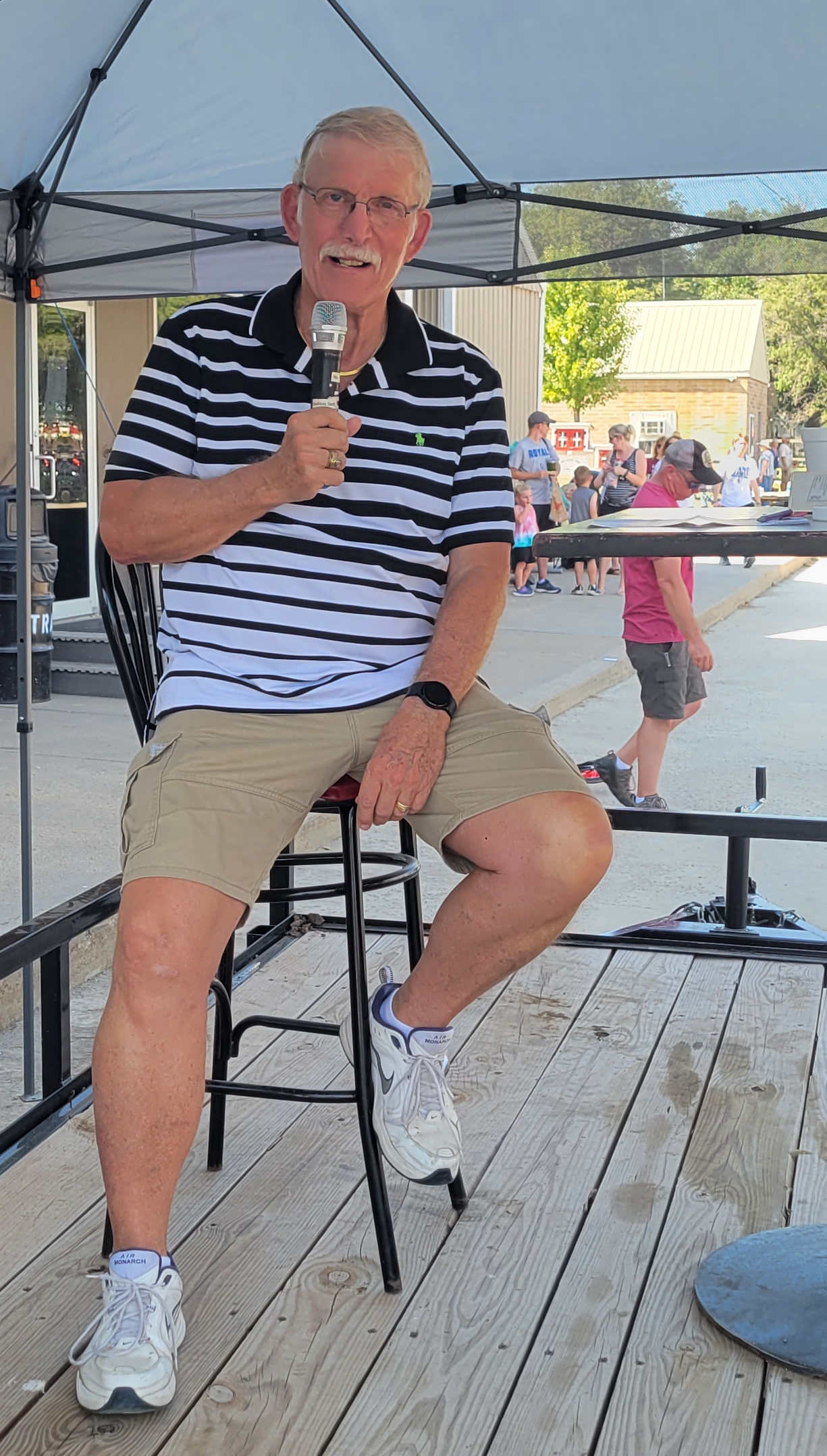 Many businesses and volunteer organizations also joined the parade, then tractors, tractors, and more tractors. The Riley County High School Marching Band flawlessly performed throughout the parade; with equipment from the Leonardville Fire Station coming behind them with lights and occasional sirens. The North County EMS 1st Responder vehicle joined the parade, which ended with horses, some with carts or buggies, and a rider performing acrobatics on horseback. 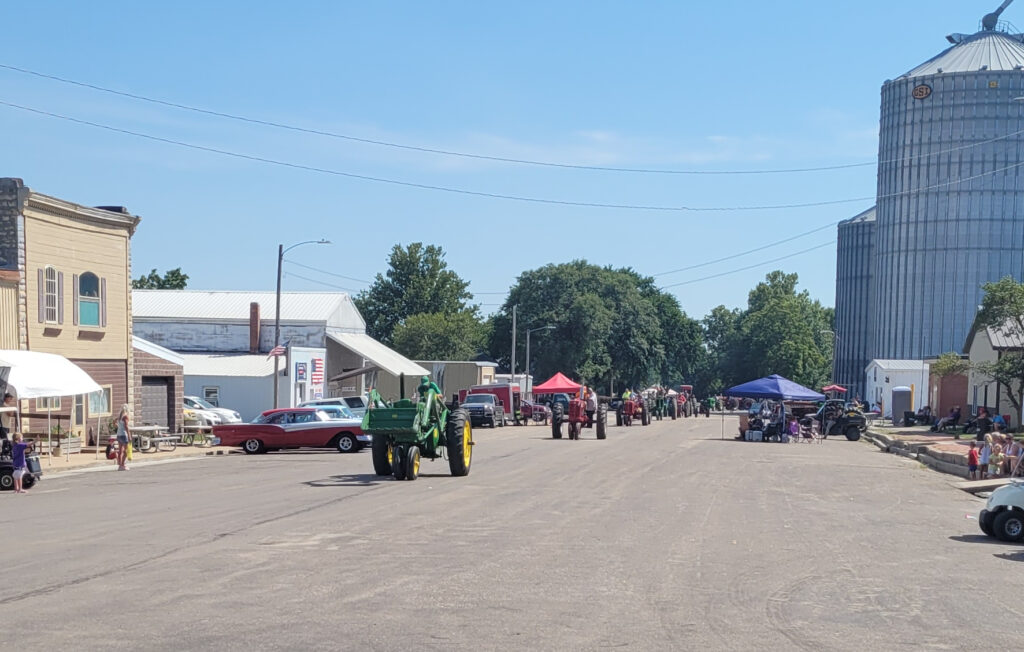 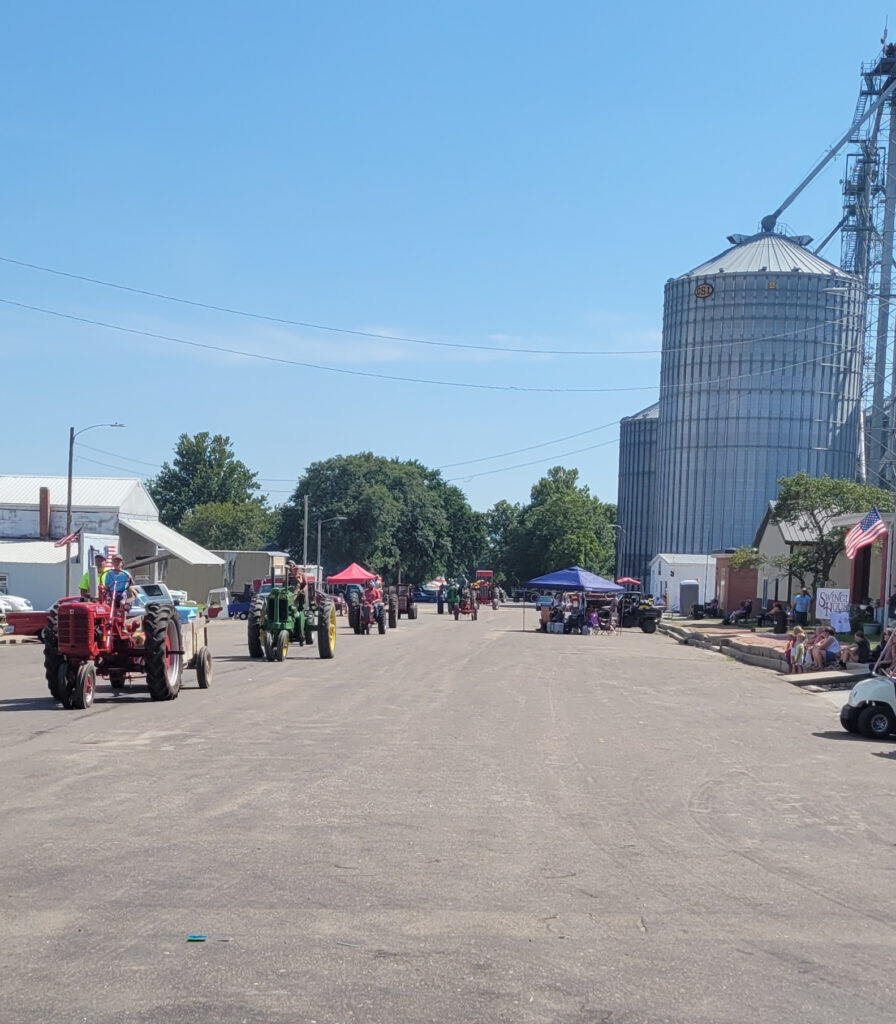 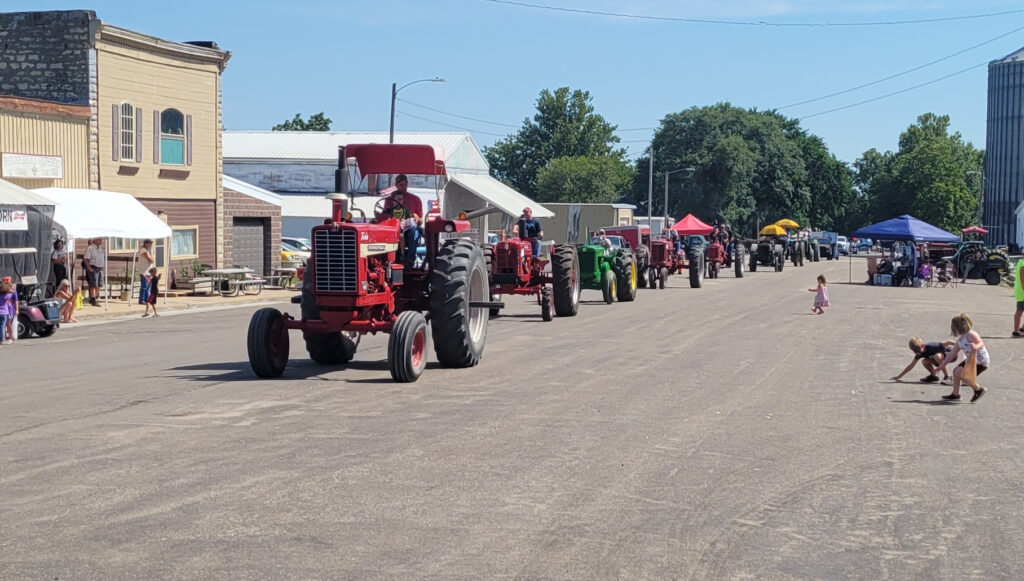 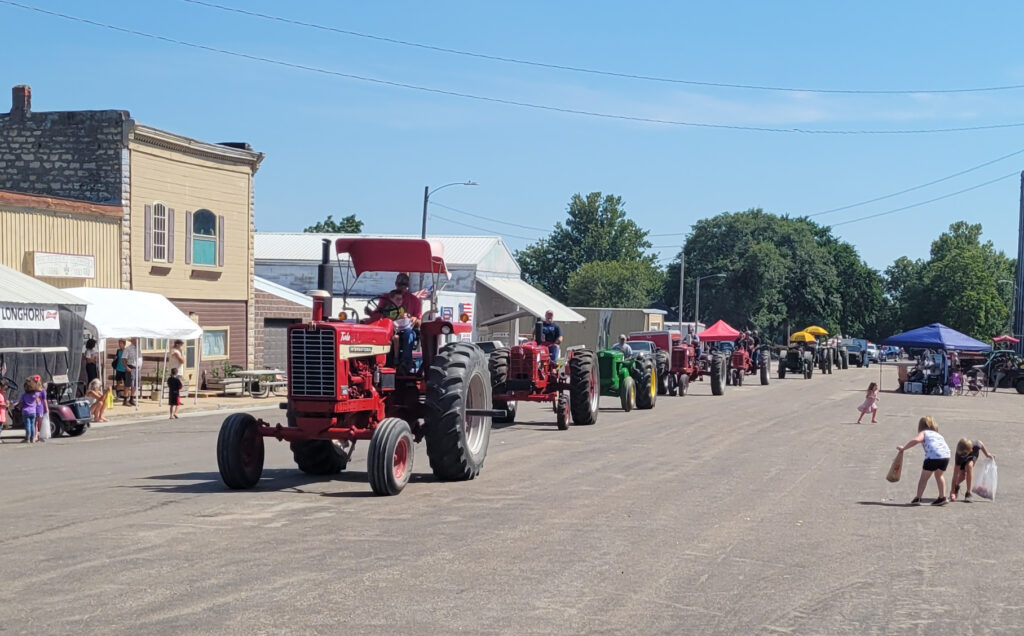 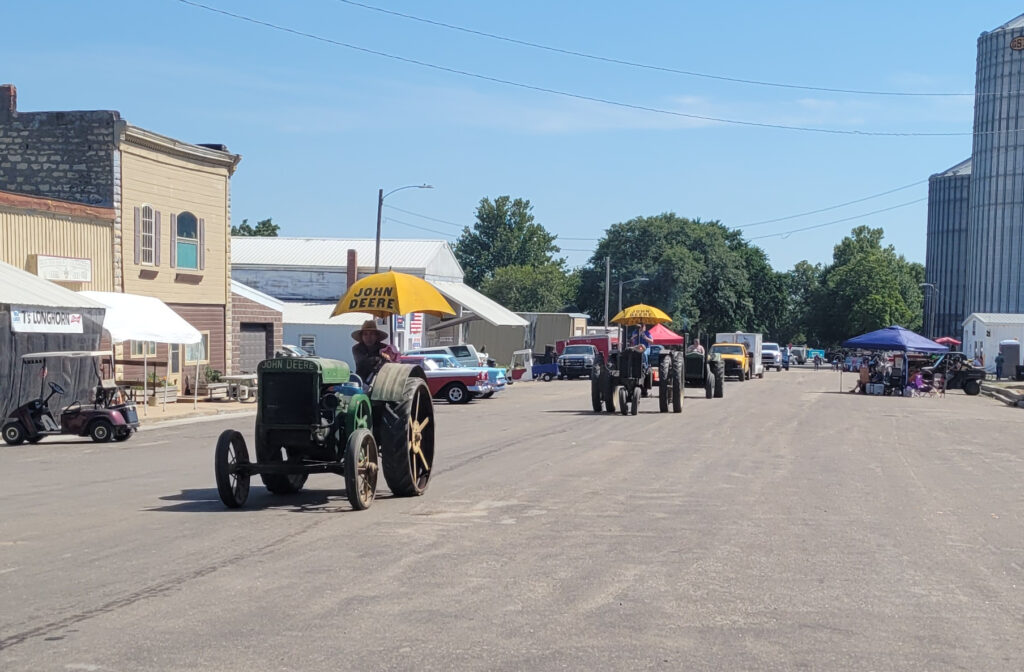 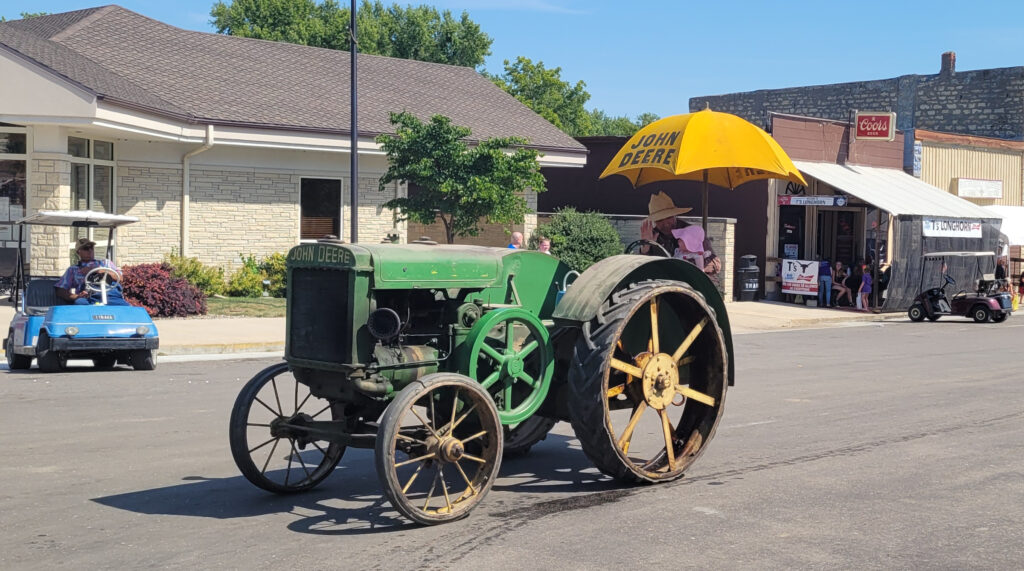 Throughout the town there were households and businesses hosting Leonardville Pride celebrations. Cultivating Caregivers was drawing a grateful crowd to their yard. 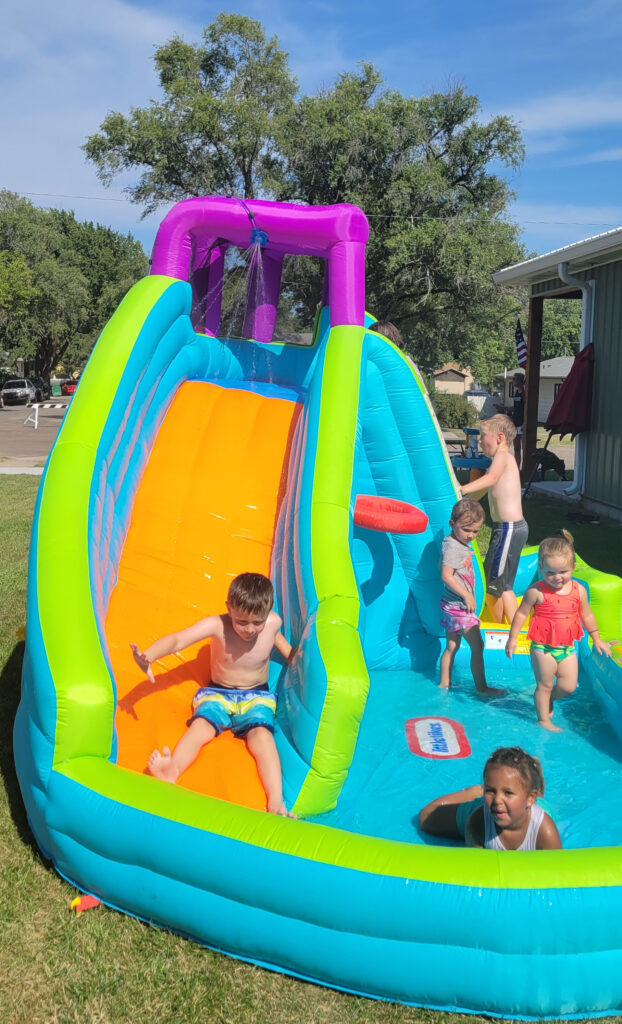 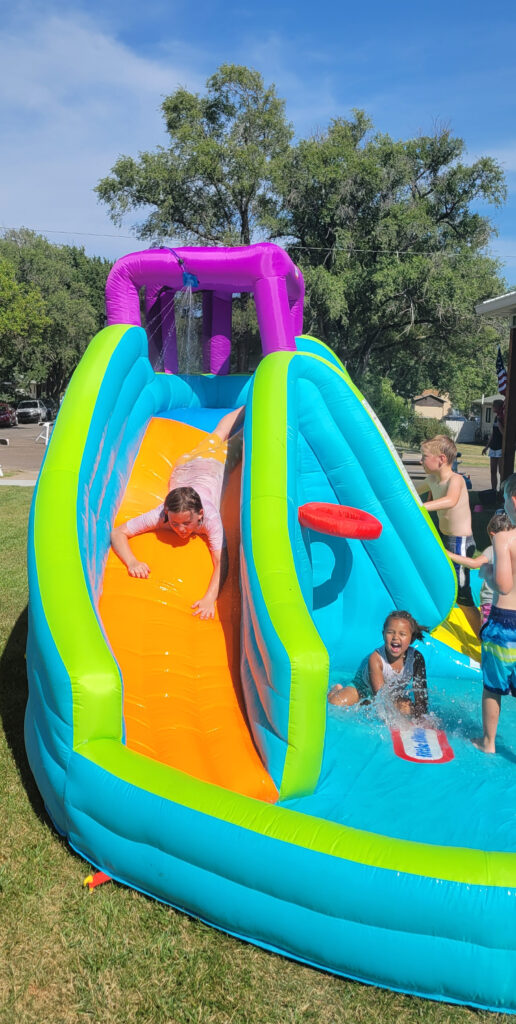 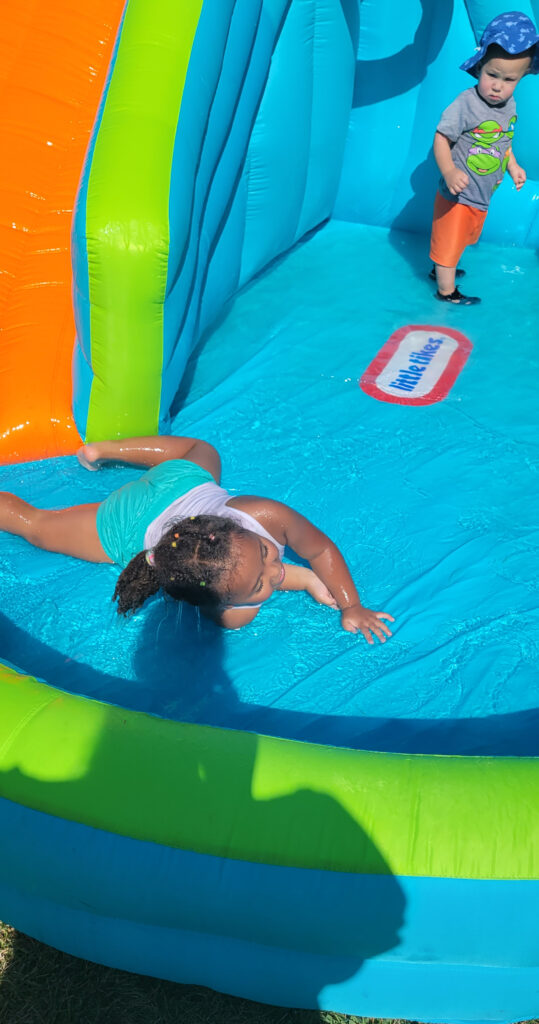 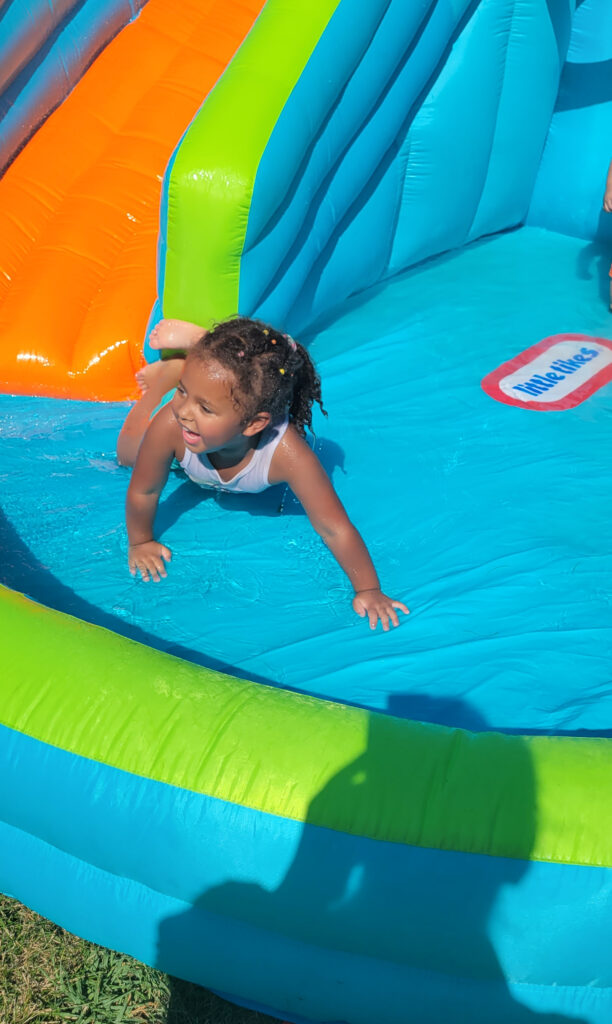 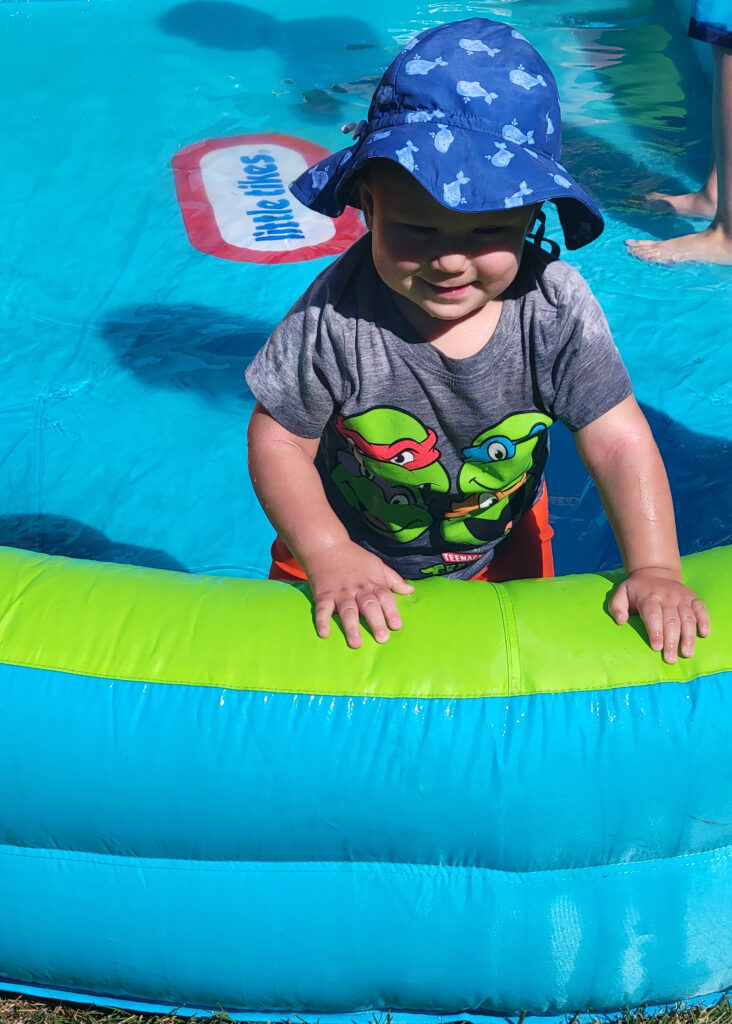 Both children and adults enjoyed the display in front of the Leonardville Nursing Home. Ruby red slippers sat below a twisting tornado with houses, farm animals, and vehicles caught in the storm. They also hosted a BBQ, free horse rides, and a bouncy castle. 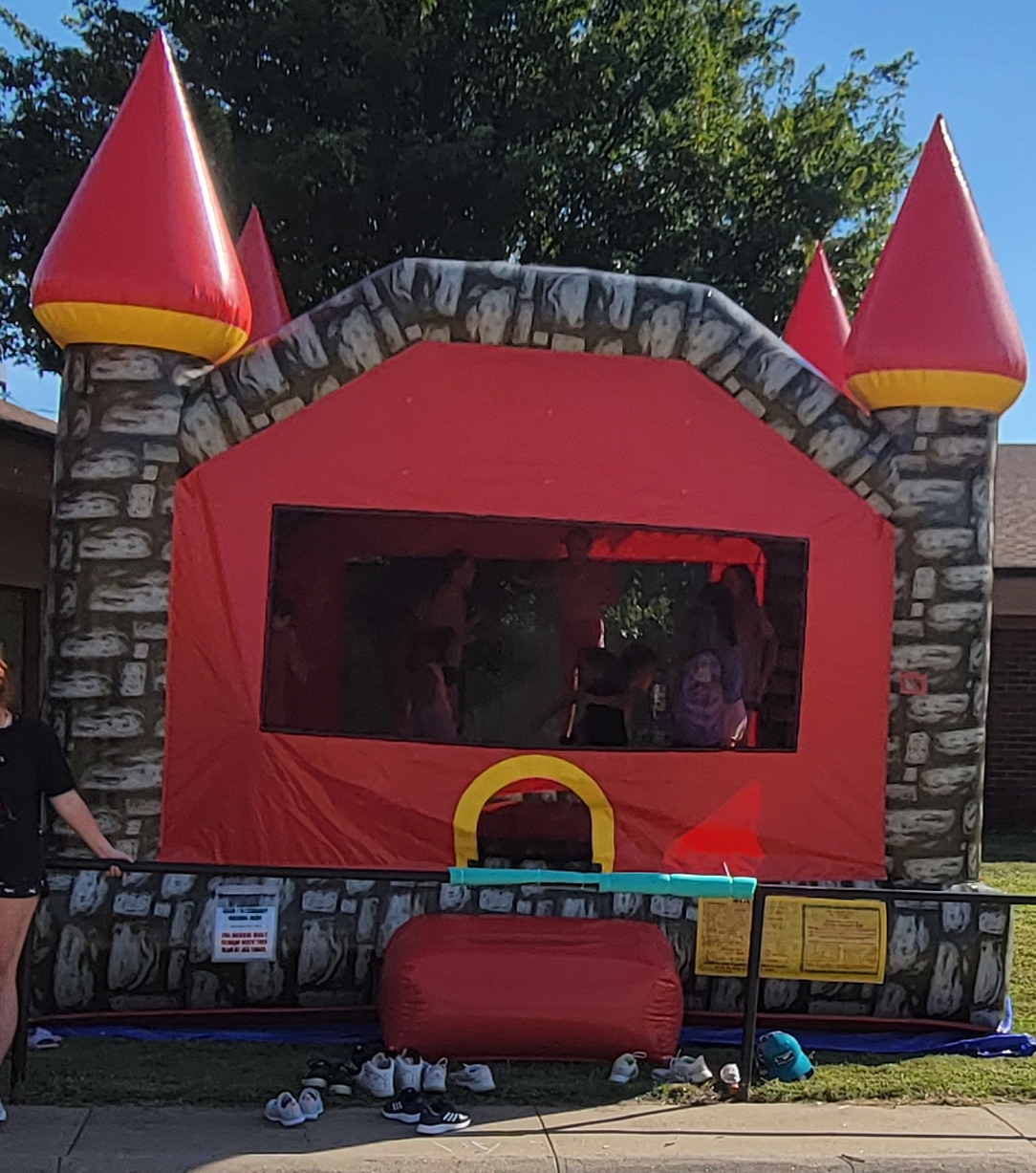 Senior citizen Happy Knorr shared her experience being in the parade, and how she dealt with the 105 degree temperature.

Happy was considering a hot air balloon ride and denied being scared of heights.

She said it’s the fall she’s scared of.

11-year-old Cora Davies of Leonardville was in the parade and also enjoyed all of the celebrations within the community.

12-year-old Izabel Nelson of Leonardville shared some of what she liked about the day.

Later, both girls enjoyed some activity in the shade at the bouncy castle.

Leonardville can serve as an example to other communities when it comes to showing off the reasons they have to be proud. Leonardville Pride’s 2022 Hullabaloo highlighted their residents, volunteer organizations, businesses, history, but mostly the attitude of the community. With a population of under 650, everybody knows everybody; without being intrusive in each other’s lives. But if someone is in need, the community rallies around to help, support, and encourage. Strangers in town are quickly noticed, and those visitors are welcomed with kindness and respect. Leonardville, Kansas is a proud community…and for good reason.