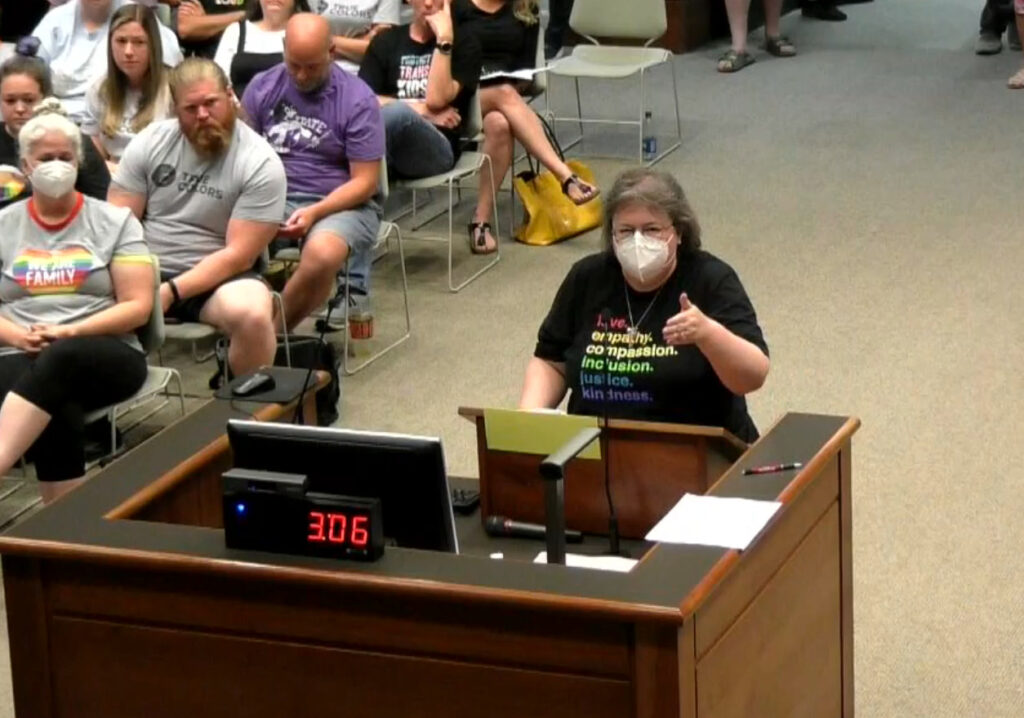 Manhattan City Commissioners voted 3 to 2 Tuesday to remove funding in the proposed 2023 budget for an LGBT youth service organization, in front of a standing-room only crowd at City Hall.

“There’s enough people in the community that just aren’t comfortable, yet, with this idea. Come back next year, and there’s a pretty good chance that you’ll get three commissioners to vote next year,” said Mark Hatesohl, one of three commissioners who voted to deny the funding request for True Colors.

Commissioners heard nearly two hours of passionate public comment, mostly in support of the nonprofit organization, founded in July by Jayme Morris-Hardeman, who also serves as the organization’s treasurer. The mission of True Colors is supporting queer and trans youth in Manhattan and reducing substance abuse in the community. The organization provides a house, used as a safe space for middle school and high school-aged youth as a place to hang out after school, with access to an on-site counselor and accesses to resources for mental health and substance abuse. The house was donated by Morris-Hardeman and her husband.

Hatesohl, as well as Commissioners Wynn Butler and John Matta cited a lack of track record in their opposition to the funding. Butler says he was troubled by the original briefing provided by True Colors, which he says was intentionally vague and didn’t spell out the organization’s mission.

“If you look at the briefing we received on the 28th of June it was completely erroneous, and that’s what upset a lot of people about funding True Colors. There was a slide that said it’s an equal opportunity organization. That’s not what it is at all,” he said.

Butler’s comments closely follow-suit with a newsletter sent out over the weekend by the Riley County Republican Party which called the city “supporting the permanent physical modification, via chemical and surgical treatment, of children/young adults is frankly concerning.” It called on the community to oppose using tax dollars to support the organization.

True Colors had sought $10,000 in city funding to be dedicated from the special taxes collected on alcohol sales intended for substance abuse prevention and treatment programs. That revenue is expected to total $492,000 in the City of Manhattan in 2023.

Hatesohl, Butler and Commissioner John Matta took issue with the lack of a track record for the young organization as reasons for not supporting the organization’s request. Commissioner Usha Reddi questioned the validity of their concerns.

“I’m not sure these five commissioners have dived into each of the other 16 organizations as we have for True Colors. I think this needs to be given a chance. I’ve seen right in front of us right now how many have shown up to speak to it,” she said.

Riley County Republican Party Chair John Ball stated in public comment he had no problem supporting counseling for LGBTQ youth. He claimed the organization supports permanent physical modification to these youth via chemical and surgical treatment.

“It’s the permanent body modification therapy that has no track record of being effective or helping with the suicide rate,” he said.

Morris-Hardeman disputed Ball’s claims, stating the organization does not advocate for such extreme treatment as was stated in a newsletter to its Republican supporters.

“We are doing nothing at True Colors that relates to permanent change to anyone’s body. We are not providing hormones, a doctor has to do that. We can’t do that as a facility. We are not recommending kids make permanent changes to their body. No doctor would do that for someone under 18 anyway. There are no services like that being provided at the house,” she said.

Morris-Hardeman said she was appalled by the message from the Riley County Republican Party’s newsletter, calling it a complete lie.

Information provided on the True Colors Flint Hills website and from Morris-Hardeman’s statement to commissioners Tuesday, state that True Colors offers kids to access a therapist and provides referrals to mental health services.

“We have a therapist who allows priority for the kids from True Colors. That’s it. That therapist is there to deal with issues like anxiety and depression and those things come from kids being treated like crap from people that don’t support them because they are LGBT,” she said.

In addition to pulling True Colors’ funding request, the commission also voted 3 to 2 to approve changes to proposed allocations in the 2023 budget for Social Services as well as aTa Bus.

“It’s 17 percent over the 2022 budget which is I think a very generous increase. I just think it’s a stretch too far to go the 28 percent,” he said.

As for aTa Bus funding, commissioners voted 3 to 2 to reduce its recommended request of $179,000 to $143,000. Last year, the commission has approved $129,000. Mayor Linda Morse and Commissioner Reddi both opposed. Reddi felt the changes took too much from some of the community’s most vulnerable population.

“The lean management you’re speaking of is from the ones that are not even being able to afford a car. The ones that are having to go to social service agencies to meet the need of survival.

The conservative majority on the commission hasn’t ruled out additional budget cuts. The final approval of the overall budget is scheduled for September 20.